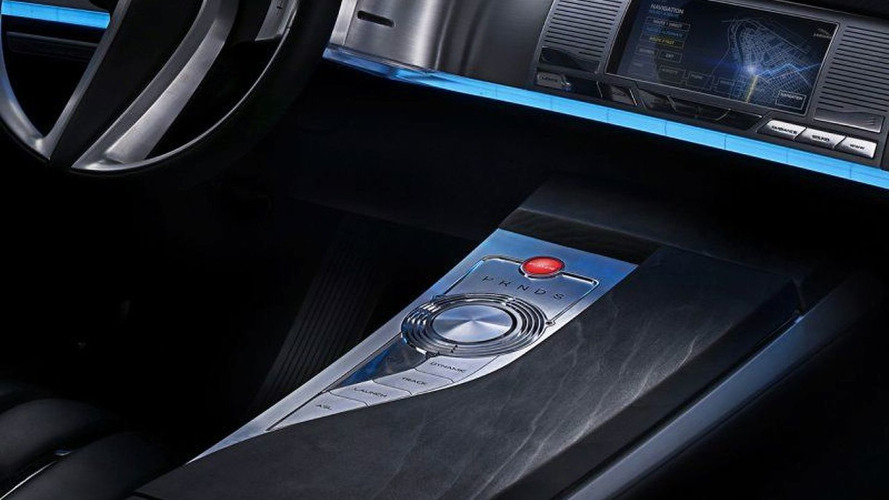 We spotted this XKR test car, sporting a camouflaged front bumper, which prompted us to take a closer look inside. We were surprised by what we saw, or rather, what we didn't see.

It appears that “JaguarDrive”- Jaguar’s new transmission interface previewed on the C-XF concept - may be in development for more than just the new Jaguar XF. We spotted this XKR test car, sporting a camouflaged front bumper, which prompted us to take a closer look inside. We were surprised by what we saw, or rather, what we didn’t see. The car’s normally prominent J-gate shifter was notably absent. The transmission tunnel was covered with fabric, so we couldn’t see what resided in place of the J-gate, but whatever it was, it laid flat, with no vertical protrusion to speak of, which pretty much describes the gear selector used in the C-XF concept. Some serious computer diagnostic gear sat in the passenger seat, and a mass of wires fed directly into the transmission tunnel, further suggesting that there is some real engineering work going on here.

So how does this JaguarDrive interface actually work? Well, Jaguar’s press information describes it like this: “Sink into the C-XF driver’s seat and a jewel-like Power button pulses on the centre console – its rhythm representing the ‘heartbeat’ of the car. Press the button and beneath your hand, concentric aluminum rings spiral downwards to allow the new circular JaguarDrive Selector to nestle directly in your palm.” The result is a streamlined center console, which appears to have been carried over onto Jaguar’s production XF, as we revealed two weeks ago in a spy shot of the XF’s interior. Although the driver’s hand blocked much of the center console, the JaguarDrive cues were clearly there. All evidence points to the fact that the concept’s transmission selector will be carried over essentially intact.

Which brings us back to this XKR prototype with the mysteriously missing shift lever. If Jaguar is working to outfit the XK with a variant of the XF’s transmission set-up, as it appears, the English blokes of Coventry must view JaguarDrive as an important way to separate themselves from the competition, and to announce Jaguar’s sporting intentions. Such a feature, with its integrated buttons to alter the car’s driving and launch characteristics, might be one way to lure a buyer’s attention away from the German and Japanese competition, and give the Jag owner something cool to show off at the country club. If Jaguar follows through, and speeds up the integration of the new transmission interface throughout its lineup, we wouldn’t be surprised to see JaguarDrive become as much of a branding exercise, as it is an engineering concept.

Photos below include descriptive captions in addition to close-up photos as it relates to C-XF concept press photos.