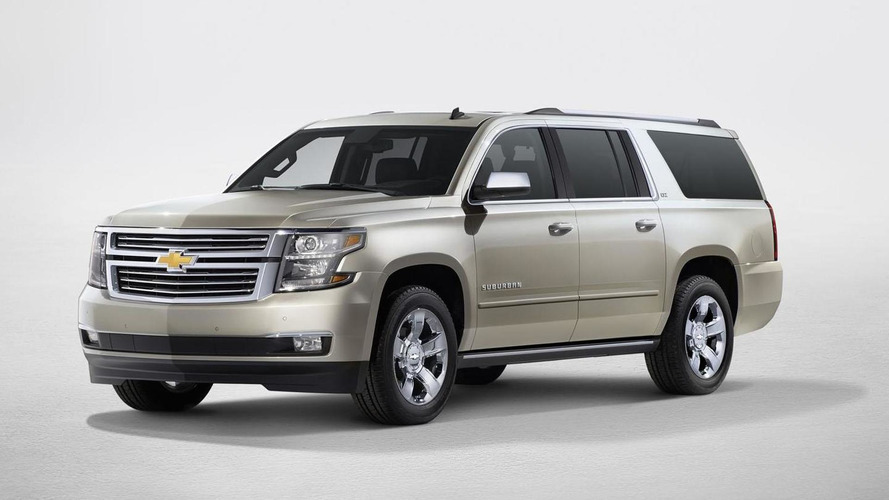 General Motors has unveiled the 2015 Chevrolet Tahoe and Suburban as well as the 2015 GMC Yukon and Yukon XL.

General Motors has unveiled the 2015 Chevrolet Tahoe and Suburban as well as the 2015 GMC Yukon and Yukon XL.

Set to go on sale early next year, the SUVs are far more refined than their predecessors and boast a comprehensive list of improvements.

The Chevrolets have an evolutionary design with a prominent grille and distinctive headlights that will undoubtedly provoke love-or-hate it reactions. We can also see an angular hood and plenty of chrome trim.

The Yukons, on the other hand, have an upscale appearance with vertical headlights, chiseled fenders and a stylish grille.

The models share a similar cabin which features higher quality materials and an improved design. Notable highlights include fold-flat second- and third-row seats and a "conversation mirror" that provides a panoramic view of the rear seats. The models can also be equipped with an optional MyLink infotainment system that has an eight-inch touchscreen display.

The full-size SUVs have a number of technical improvements including a stronger frame and new inlaid doors - which fit into the body side openings instead of over the top of the body - that significantly reduce drag and wind noise. Other highlights include an electric variable-assist power steering system, a four-wheel-disc braking system, a third-generation magnetic ride control system (on higher-end variants) and wider tires that promise to deliver "improved cornering performance.

On the safety front, the models have a front-seat center air bag, forward collision alert, front park assist, lane departure warning, lane change assist, rear cross traffic alert and adaptive cruise control. The SUVs have also have an advanced anti-theft system that can that can shut down key systems to make the model almost impossible to move or start.

Under the hood, there's a 5.3-liter EcoTec3 V8 engine that develops 355 bhp (250 kW) and 383 lb-ft (519 Nm) of torque. It is connected to a six-speed automatic transmission which can be connected to an optional four-wheel drive system.