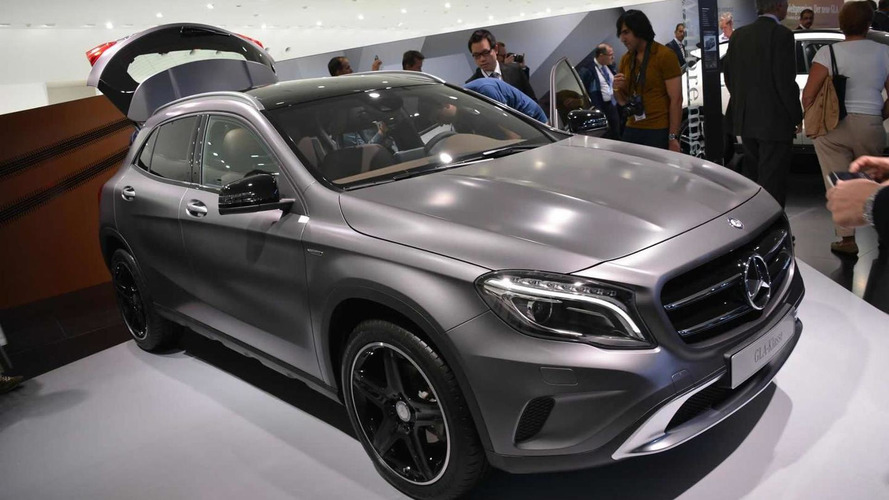 Mercedes-Benz has unveiled the 2014 GLA compact crossover at this year's Frankfurt Motor Show in Germany.

Mercedes-Benz has unveiled the 2014 GLA compact crossover at this year's Frankfurt Motor Show in Germany.

The premium compact crossover is essentially an A-Class hatchback with a higher ground clearance and a beefier body kit. Exterior dimensions stand at 4417mm length, 1804mm width and 1494mm height, with 421 liters of cargo space which can be expanded to 836 liters after folding down the rear seats. For more luggage capacity, the GLA will be available with an optional Load Compartment package that will enable the rear seat's backrest to be moved in a steeper position which will expand the load area by 60 liters to 481 liters with the rear seats up.

A range-topping GLA 45 AMG will join the lineup with a 4-cylinder, 2.0-liter turbocharged engine taken from the A45 AMG and CLA45 AMG. Power will stand at 360 HP (265 kW) transferred to the 4MATIC all-wheel drive system via a dual-clutch, 7-speed AMG SPEEDSHIFT gearbox. Aside from the more powerful engine, the AMG version will also have a sport-tuned suspension, quad exhaust, bigger brakes and a more aggressive exterior styling which will include a built-in diffuser.

Deliveries of the regular GLA will start early next year, just about the same time when we expect Mercedes-Benz to unveil the AMG derivative.