Long-Door Jetta Coupe Is Really Freaking Us Out Right Now 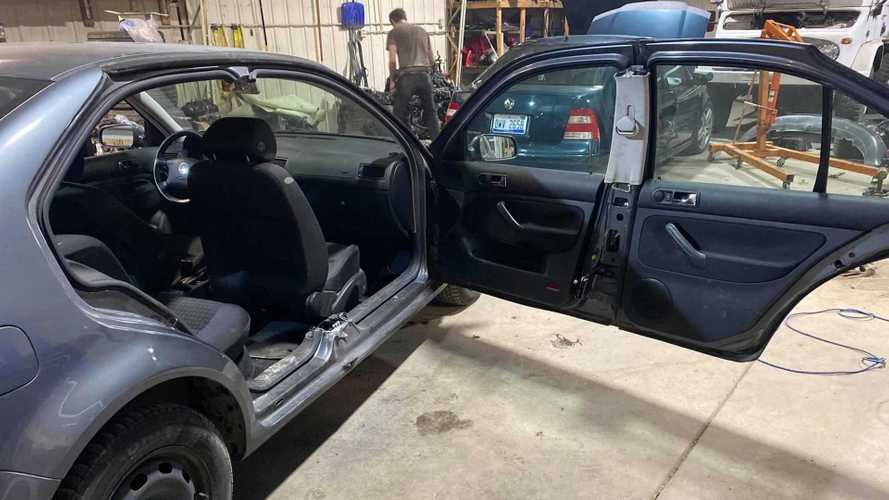 Who wants to park beside this car?

What started out as a joke turned out to become a Reddit sensation – this Volkswagen Jetta has been modified into a two-door coupe, but not in a tasty or civilized way as you usually see her in Motor1.

Ladies and gents, meet this long-door Jetta, done by Harry's Auto Restoration & Repair in Wyoming, Michigan. Now, before you raise your pitchforks in protest against this atrocity, let it be known that this isn't really what this car is intended to be.

Here's a video to satisfy your curiosity:

Remember the Koenigsegg Gemera? This car is sort of reminds us of that. It has two long doors, practical, an seat four (or five, actually) but it's in no way as glamorous as the Swedish family-friendly hypercar. And it's quite exotic, too, in every sense of that word.

We spoke with Harold Bloomer, the owner of the restoration and repair shop where this Jetta coupe hails, and he said that this Jetta was bought at Copart for $200. Apparently, the original intention was to cut off the top and convert it into a truck – not that one makes it sound any better.

This Isn't The Weirdest We've Seen So Far:

VW Beetle Furbie Tribute Is A Weird Way To Spend $5,900

This Shorty C5 Chevy Corvette Begs The Question: Why?
⠀

Russia Takes Tuning To Next Level By Installing Four Mufflers

After 20 minutes and through the use of a saw blade, the B-pillar has been cut off the body and ultimately converting the Jetta into a two-door coupe. Imagine our relief when he said that it's actually just a joke because with those B-pillar cut off, imagine how the structural integrity and rigidity of the car have been affected.

Don't get discouraged by this build, though. Harry's Auto Restoration and Repair isn't really about making weird customizations. Based on reviews on his Facebook page, it seems like the shop is doing a great job, especially with Volkswagens and Audis.