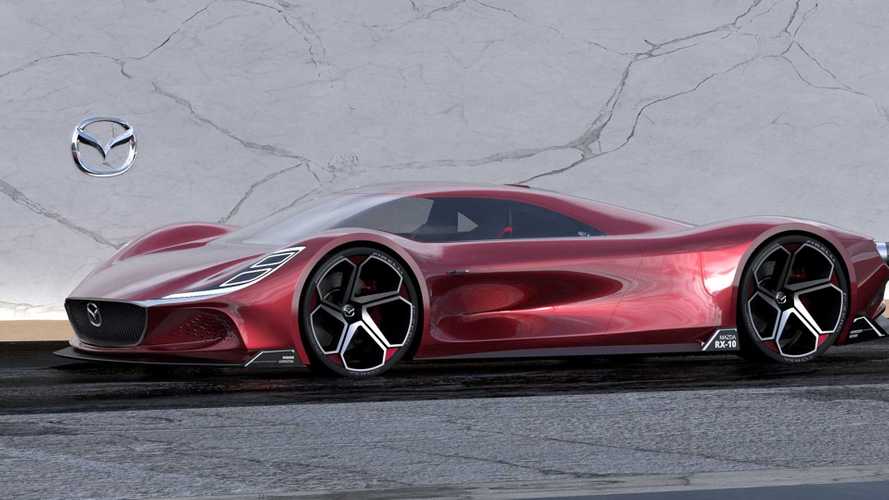 It would use a hydrogen-fueled rotary engine to power the rear wheels and two electric motors at the front.

The Mazda 787B is the brand's most famous race car because of its victory at the 24 Hours of Le Mans, and now designer Maximilian Schneider has a rendering for a rotary-powered competition machine that could take the brand back to the top step of the podium in the famous French event. He calls it the Mazda RX-10 Vision Longtail, and the vehicle looks fantastic.

Schneider tells Motor1.com that the RX-10's long, sculpted rear is a nod to the proportions of Group C endurance racing cars from the 1980s. "To balance this out and inherit the brand's fluid and emotional design language of "Kodo" (Soul of Motion), I kept the surfacing simple and three-dimensional without extra drama like wild aero-cuts and large spoilers," he told us.

The low-slung shape looks like it would slip through the air and would be eye-catching whether the RX-10 is cruising down the street or doing triple-digit speeds on the Mulsanne Straight. The rear offers some of the most visually interesting elements like the triangles that create the window into the engine bay. The shape is a subtle reference to the rotary engine that powers the car.

Schneider imagines the RX-10 Vision Longtail competing in the new hypercar class at Le Mans. To comply with modern emissions rules, it would use a mid-mounted, hydrogen-fueled, three-rotor Wankel engine displacing 2.3 liters and producing 780 horsepower (582 kilowatts) to the rear wheels. Two electric motors making a total of 250 hp would power the front wheels. This setup would get the RX-10 to 62 miles per hour (100 kilometers per hour) in 2.5 seconds and a top speed of 265 mph (427 kph).

In addition to rendering a variety of concepts on his Instagram page, Schneider is an exterior designer at Mitsubishi Motors Japan. Let's hope the brand sees his talent and gives him a chance to influence the styling of future models.