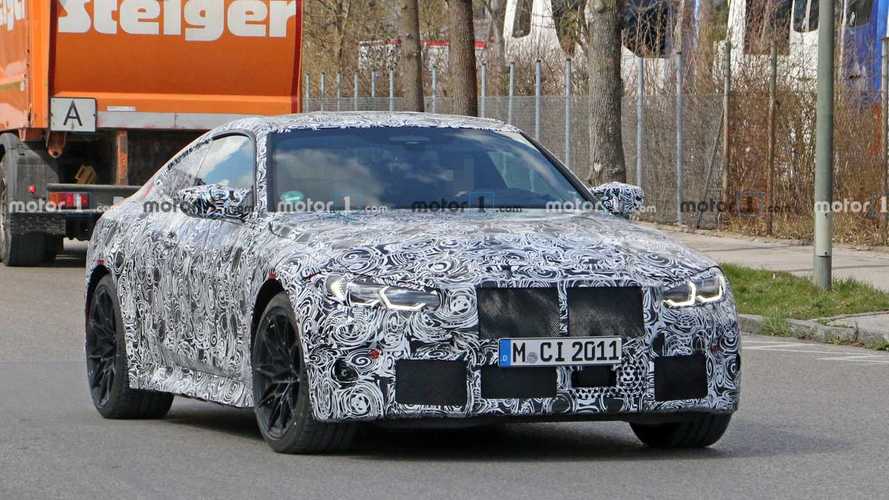 A close look at the interior shows three pedals and a stick.

Among the many automotive-related changes around the world right now is a drop off in spy shots. It’s understandable – many areas are under shelter-in-place orders so camera operators aren’t as free to roam. As such, some of you may have forgotten that BMW is building a new 4 Series with a ginormous grille. Oh, you didn’t forget? Well, here are fresh spy shots of the hot M4 trolling through Germany to remind you. And this time, we even have shots of the interior showing a stick and three pedals.

Yes, the M4 will get a manual gearbox, confirmed in these shots peering through the side glass of this prototype while parked. BMW already told us the option would be there so it’s not exactly a surprise, but seeing the manual gearbox with three pedals in the foot well will certainly be a welcome sight to enthusiasts.

Less welcome will likely be the big grille, which we’ve seen leaked in numerous photos and was confirmed by BMW in its M4 GT3 teaser back in December. We’ve also glimpsed it on other prototypes wearing less camouflage than what we see here, not to mention seeing it outright on standard 4 Series prototypes. We’re tempted to say the M4 might get a completely different front face, especially with the overall response on the look being quite negative and the fact that this prototype is still wearing heavy front camo, but don’t expect that to happen.

New BMW M4 Spied Being Unloaded From A Trailer

When will we know for sure? Coronavirus has certainly pushed back new vehicle debuts in the automotive realm, but we haven’t heard any new rumors regarding the 4 Series debut. The standard car is still slated for a June arrival, followed by the M4 GT3 coming later in the year. That still puts the M4’s debut either late this year or some time into 2021.