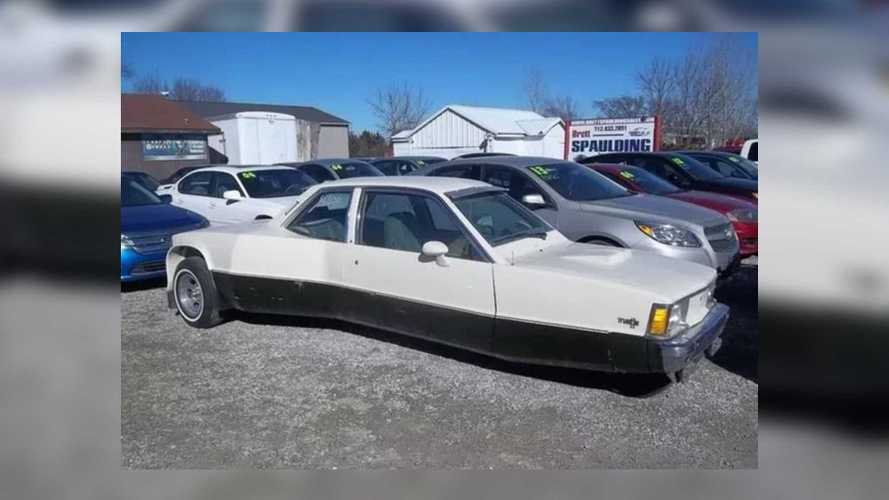 Every now and then, a car comes along that changes the automotive landscape. The Chevrolet Citation – born in 1980 during the height of emissions-choked models oozing from Detroit – isn’t one of them. On the other hand, a rear-engine, two-seater absolutely could rock the automotive world. The strange contraption you see here is indeed a two-seater with the engine at the back, but it’s also a Citation. Actually, it’s two Citations, yet it has half the seats and 75 percent of the wheels. It’s okay if you’re confused right now, because we definitely are.

We happened upon this oddball at Cars.com, where it’s listed for sale. That’s right, you can actually buy this bonkers machine for $4,895. That cash will get you a very narrow Citation with tandem (yes, tandem) seating and an extra Citation front clip grafted onto the back. That’s also where the engine is, because the actual front is now home to a single, center-mounted wheel instead of two at the corners. You read that correctly – this two-seat, rear-engined Chevy is also a three-wheeler. Reliant Robin fans must be so jealous right now.

What else do we know about this build? It’s listed as a 1989 model but the Citation went out of production in 1985. Perhaps 1989 is when this Frankenstein version was created, which might explain why the for-sale ad says it needs a paint job. The engine appears to be a stock Citation four-cylinder, which was Chevy’s iconic Iron Duke 2.5-liter mill good for about 90 horsepower (67 kilowatts) on its best day. It’s terrifically skinny up front, but with a wheelbase the size of a football field, we bet this compact runabout boasts a turning radius similar to the Titanic. You know, just the sort of thing you want with a three-wheeler.

The ad says the car is being sold by Brett Spaulding Sales in Iowa, and apparently it was built by a man that “made a lot of crazy projects before this one.” We won’t deny the amount of work that went into this project, and it looks well done. It’s certainly an automotive oddity among oddities, but is it one that will capture the heart of a buyer?

Motor1.com readers, we so want to hear your thoughts on this one. Is this Citation crazy cool, or just plain crazy?