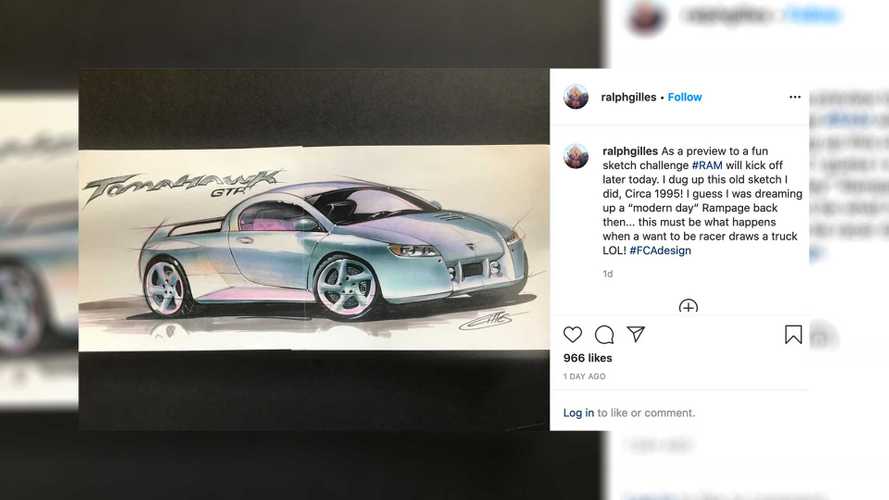 It's time to bring back the Rampage.

Right now, Fiat Chrysler Automobiles is hosting a one-day design sketch contest. The deadline is 5 p.m. Eastern, so time is running out. But if you are looking for a bit of inspiration, then you should look no further than Ralph Gilles’ own Instagram account. He’s the head of FCA design, and he knows a thing or two about designing cars. On Instagram, he posted a sketch of a Dodge Rampage successor he drew 25 years ago in 1995.

He called it the Tomahawk GTR, but in the post, Gilles wrote he guesses he was “dreaming up a “modern-day” Rampage back then.” We can certainly see the influences. The Dodge Rampage was but a blip in automotive history, lasting just a few years. It couldn’t compete against the likes of the Chevy El Camino, Subaru BRAT, and other minitrucks of the era. Dodge teased the nameplate’s return with the truck-like 2006 Dodge Rampage concept, though the design went nowhere.

FCA Is Hosting A Sketch Battle For Outrageous Ram Designs
⠀

Gilles’ Tomahawk looks super 90s with the rounded front end, bulbous greenhouse, and rear spoiler over the tailgate. The front grille looks fish-like while the overall design looks like a preview of the Chevy SSR – a turn-of-the-century El Camino successor that also lasted just three model years like the original Rampage in the early-to-mid 1980s. Gilles’ design is sportier than the Rampage ever was, too.

This isn’t the first time Gilles has shown off his and his team’s design chops. Late last month, he posted another sketch to his Instagram, this time showing off a rejected Dodge design that made the controversial yellow front splitter guards integral to the car’s design. There’s a ton of work that goes on behind the scenes before a vehicle arrives in dealership showrooms, and many begin life as two-dimensional sketches like Gilles’ Tomahawk.