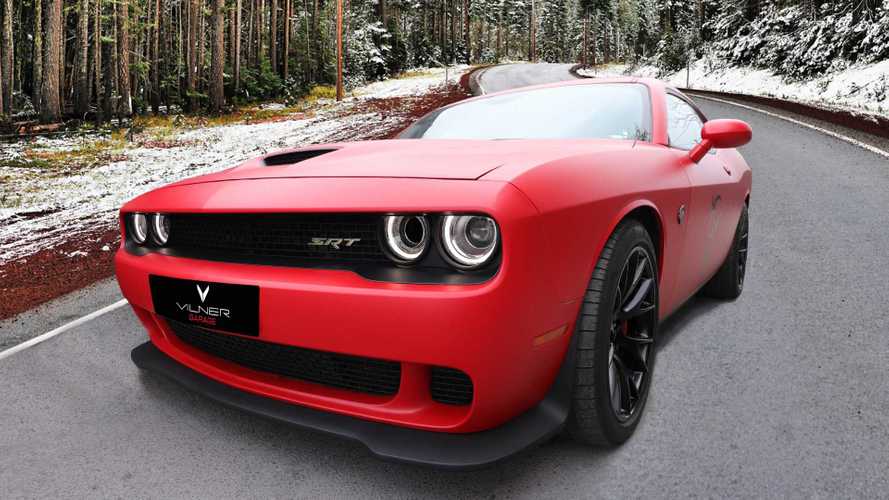 It's not a demon but it's not an angel either.

Bulgaria’s Vilner tuning house doesn’t put boundaries on the range of cars it modifies - these vary from the one-off Tramontana sports car to classics like the Mercedes-Benz 250CE, to modern luxury yachts on wheels like the BMW X7. The latest model to go under the knife at the firm’s studio in Sofia is the Dodge Challenger SRT Hellcat.

The car started its life as a “regular” SRT Hellcat but its owner wanted a bit more customization and called the folks over at Vilner for help. Several days later, the American muscle left the tuning company’s garage with an array of carbon fiber upgrades and a few new touches inside and out, bringing it closer to the appearance of an SRT Demon.

Starting with the exterior, the car got a complete matte red wrap and new Demon stickers. More important changes have happened inside the cabin where we find reupholstered seats, new seat belts, and new central console and door cards finishes. Also, the back of the front seats is covered in red Alcantara, while parts of the seats mechanisms are covered with carbon fiber.

Add More Style To Your Charger And Challenger:

“We started by stripping the interior, piece by piece, as if we’ve begun to reveal the true soul of the Demon,” company founder and ideologist, Atanas Vilner, explains. “Then came the time to dress it up again, not in Prada, but in something that even Mrs. Prada herself wouldn’t have thought of. We had to make sure that just by someone looking at the interior will instantly recognize that there is no other than one of the most powerful engines on earth hiding under the hood, we wanted to show its power even when the car isn’t moving, even when it’s heart is not pumping gasoline at a few thousand RPM’s per second.”

It’s a little surprising to see that someone is trying to upgrade the appearance of his SRT Hellcat and bring it closer to the Demon but is leaving the performance of the car in stock form. That’s not to say the car is slow - with a 0 to 62 miles per hour (0-100 kilometers per hour) sprint in just 3.6 seconds, that’s definitely not the case.

The garage door shakens. A second of silence follows and again the noise strikes, this time the vibrance being so strong that you would’ve thought someone was trying to break in. Third time in a row, but this time even the WW2 veteran that was passing by turned his head just to make sure this noise isn’t coming from the memories of the war.

For any other person out there this would have been just a really noise car, but for Atanas Vilner and his team this was a Demon, a real one in fact - head to toe made from steel and gasoline.

“I remember the first time I heard that sound” - tells Atanas Vilner. “I opened the garage door and then I saw it - I saw the Demon straight into the eyes and at that moment I realized I’ve got myself a very, very different project, and a challenging one for sure. When the owner of the vehicle called me a few weeks before for the first time, he went straightforward saying he wanted his beloved to receive a new look from us. He didn’t mention any details, not even the brand of the car! He just insisted we transform it and days later he showed up at the atelier just like that - with a lot of noise and not a single notice in advance.

The American monster was parked in the center under the brightest lamp - on the one hand so everyone working can admire it's presence, on the other to make sure there is no chance it's ominous shadow can come out. If you were in the atelier at the time the car was, you would’ve noticed the nervous feeling someone got when they had to turn their back on the Demon. Everyone who has worked on the vehicle was in awe of it, and the idea was that even those who only saw it on the streets or were lucky enough to have a ride in it, to clearly understand what a Demon is.

“We started by stripping the interior, piece by piece, as if we’ve begun to reveal the true soul of the Demon. Then came the time to dress it up again, not in Prada, but in something that even Mrs. Prada herself wouldn’t have thought of. We had to make sure that just by someone looking at the interior will instantly recognize that there is no other than one of the most powerful engines on earth hiding under the hood, we wanted to show its power even when the car isn’t moving, even when it’s heart is not pumping gasoline at a few thousand RPM’s per second.” - Atanas Vilner says with excitement in his eyes.

Days later the incarnation is almost complete - red seat belts and embossed pattern on the inside of the doors. The back of the front seats is covered in red alcantara  and at the front, the design seems to depict the battle between angels and demons - soft, fine, perforated Nappa leather with embossed details on the sides, and tight red stitches that connect everything. The devil is in the details they say, in this case, the Demon. You see, Atanas Vilner thinks of those details even the devil wouldn’t dare to think of - carbon and alcantara on the seat mechanisms? Yes, that's what Vilner would do even to a car that is known for its power rather than its beauty, because you see, everything is important for Atanas Vilner when it comes to his job. If you say he is a perfectionist, well, you are right. No detail, not even a small stitch in the trunk can go unseen by his keen eye, and no element cannot be untouched by his endless imagination. Simply perfection, simply Vilner.

“Your idea, your car.” One of the many valuable qualities that Atanas Vilner has is that he takes his job really personally - he first will like to get to know you, then to learn some particular details about you that will later help him build an idea, an image, and finally that image has to be impregnated in your car. He takes pieces of your soul and mixes them with the soul of your car. Not an easy process for sure, but the love and time that were put are always seen in the final project and in this particular one you can’t miss it. Almost every detail, part and element was redone. Three souls collide perfectly - the one of the car, its owner and of course Atanas Vilner’s, each taking the necessary amount, as mixed by a professional pastry chef. It’s hard to describe it in words. Sometimes, you have to stop thinking for a minute and just look without asking any questions. Sometimes, magic can’t be explained and in this case all you are left with is that “Wow” moment that holds your breath. It’s the moment when you see a Vilner Garage’s project. It’s this kind of magic that leaves you speechless.