2021 Nissan Frontier: Lighter And More Efficient, But Not All-New

The redesigned body will be more aerodynamic, but some of the old bones will be carried over.

It was a bittersweet moment for truck fans when Nissan rolled out the 2020 Frontier a couple of months ago as despite the new engine and gearbox, it was still essentially the same truck launched way back in 2005. A next-generation model is scheduled for 2021 and it will carry over the 2020MY’s 3.8-liter V6 and nine-speed automatic transmission, wrapped up in a new and more efficient package.

Our colleagues at Autoblog were able to find out some preliminary details about the truck during a roundtable with a Nissan powertrain expert. As we previously reported, the outgoing truck does 18 miles per gallon in the city and 24 on the highway in its most efficient version (two-wheel-drive model), but the 2021MY truck will further improve those numbers thanks to a redesigned and more aerodynamic body. 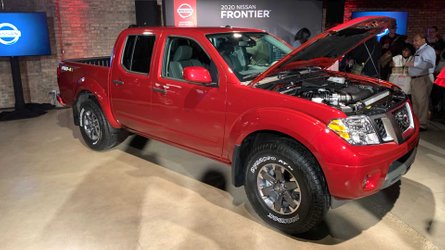 Nissan is also promising the 2021 Frontier will be lighter than today’s truck, but without going into any details about how much weight the engineers have managed to shave off. Needless to say, the diet will also contribute to the vehicle’s efficiency to boost those mpg numbers even more.

That being said, the next generation won’t be an all-new development as some of the bits and pieces are still going to be carried over from the outgoing model. Nissan didn’t specify what will be borrowed from the current truck, but Autoblog believes the 2021 Frontier is being engineered for the U.S. market rather than being an adaptation of the Nissan Navara / NP300 sold around the world.

It remains to be seen whether the smaller four-cylinder engine and the manual gearbox removed with the 2020MY will make a comeback, although we wouldn’t count on the three-pedal variant to return since Nissan says the manual had a take rate of just five percent. However, Motor Trend reported last October the next-gen model would get an updated six-speed manual, so perhaps the clutch pedal isn’t dead just yet.

The same report from MT talked about Nissan’s plan to retain the “same basic platform,” but with an updated chassis and electrical architecture. The revised styling is said to evoke the “spirituality of adventure” (whatever that means) as the truck will have a “strong” design with a look significantly changed compared to the outgoing Frontier. An older report from Automotive News quoted an insider saying the new model looks “like something a truck guy would want.”

Despite the unprecedented automotive crisis caused by the coronavirus pandemic, Nissan says the next-generation Frontier is still scheduled for a reveal later this year when the new Rogue / X-Trail is also programmed to come out.