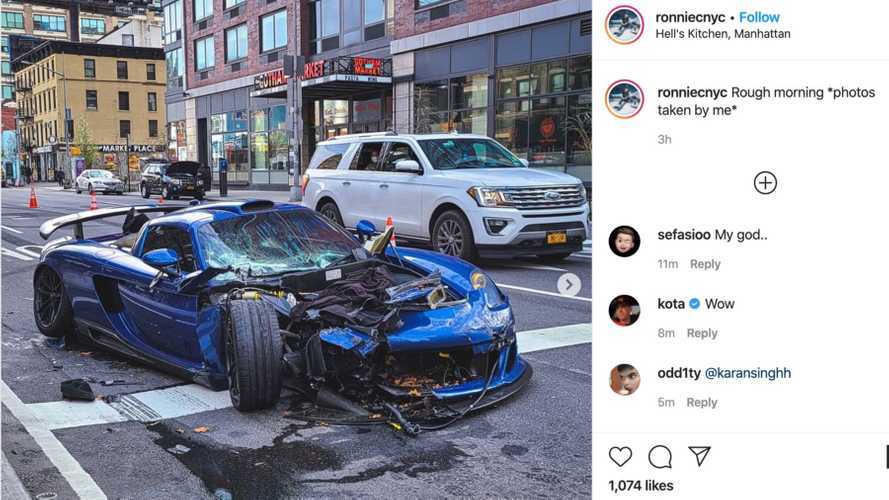 In an absolutely bizarre incident, the driver of an extremely rare Porsche Carrera GT-based Gemballa Mirage GT sped through Manhattan's mostly empty streets and crashed into multiple vehicles. Videos make the stunt look like something out of Grand Theft Auto but in the real world.

Multiple people on the scene posted photos and clips of the carnage. The driver smashed into several vehicles but just kept going. A security camera even caught the car hitting a parked van at high speed. The person behind the wheel eventually stopped at an intersection, and the police took him into custody.

The identity of the driver is not entirely clear at this time. A New York Police Department spokesperson told Road & Track that the owner was behind the wheel. WNYW-Fox 5 News initially reported that the Porsche was stolen but later updated the story saying that it wasn't.

Based on the extent of the damage, this Gemballa-tuned Porsche requires extensive labor to repair. The passenger side of the front fender is gone, which leaves the wheel and suspension components exposed. Coolant is leaking from the vehicle, and the windshield is shattered.

The situation isn't quite as bad at the back, relatively. A portion of the bumper is missing. Plus, both wheels are heavily bent, suggesting that the suspension is destroyed.

The regular Porsche Carrera GT is rare enough, but there are just a handful of Gemballa-tuned examples in the world. The company offered the vehicle across several editions, including one with a twin-turbo version of the 5.7-liter V10. Others kept the powerplant naturally aspirated but boosted the output to 650 horsepower (485 kilowatts), rather than the stock 603 hp (450 kW).

This is still a developing story. Look for more updates what would cause someone to drive a rare supercar like it's in a real-life video game as the information becomes available.

More Details On The Mirage GT: