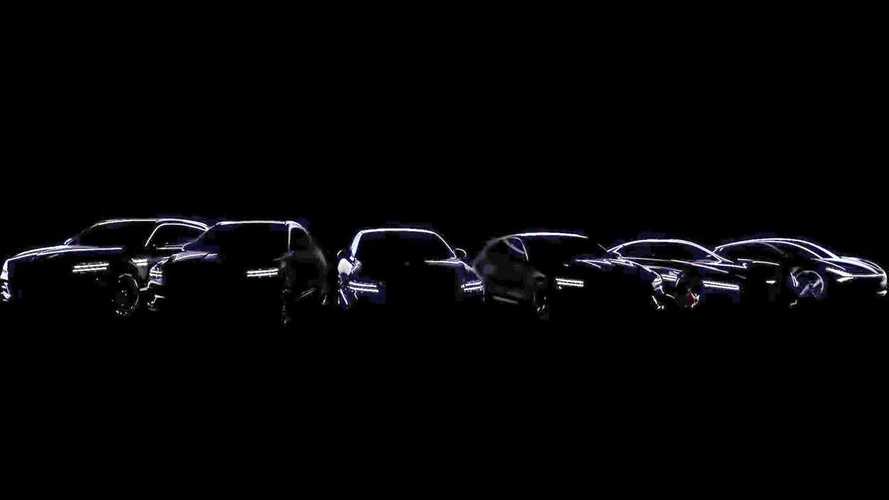 Let's try and figure out what Genesis is teasing with this shadowy image.

The good folks over at The Korean Car Blog brought to my attention the adjacent image they saw posted on a South Korean forum. After doing a bit of digging, we eventually discovered it’s from a video Genesis released yesterday about the design details of the all-new G80. Being a teaser image, there aren’t any details regarding the identity of these six cars, but we wouldn’t be doing our job if we didn’t try to decipher the mystery.

After brightening up the image in an attempt to expose more design details, we came to the following conclusion. From left to right, we seem to be looking at the GV80, GV70, G80, G70 wagon, Essentia, and Mint. There’s nothing to talk about regarding the GV80 and G80 as the SUV & sedan duo has already been revealed in full.

As for the GV70, we spotted a camouflaged prototype back in October 2019 ahead of an already confirmed 2021 launch. Taking into account its nameplate, it will likely be based on the G70 sedan, presumably, the facelifted version that will switch to the two-level light design Genesis is now embracing.

Speaking of the G70, William Lee, the brand's global boss, did hint not long ago that a wagon is already being considered, and it appears the long-roof derivative is actually planned. We’re getting the sense that’s actually a G70 wagon, but not in the traditional sense of the body style as it appears to be one of those swoopy wagons similar to what sister brand Kia has done with the stylish Proceed. That said, we wouldn’t go as far as calling it a shooting brake since it will likely still have rear doors.

As for the Essentia and Mint, it would seem Genesis is determined to put the two concepts into production, but don’t expect them to look just as nice as the showcars. After all, the company did suggest the fabulous electric coupe would hit the market in 2021 as a limited-run affair with the highest price tag among all of the Genesis models.

The two-seater EV unveiled at last year’s New York Auto Show appears to be in the works as well, but we wouldn’t count on those funky rear scissor doors to make it to the production model. The only technical specifications Genesis released about the Mint had to do with its estimated range of 200 miles (322 kilometers) and 350-kW fast-charging capabilities.

If the teaser image seems familiar, it’s because Genesis also briefly showed it during the world reveal of the GV80 at the beginning of the year. This time around, Hyundai’s luxury marque deliberately made it more revealing by adding design details to the rear end of the cars.