As usual, the F-150's vast engine lineup offers something for everyone.

The next-generation Ford F-150 won’t be debuting on April 29 as some outlets have reported, but it looks like we won’t have to wait for whenever the premiere is programmed to discover its engine lineup. Provided the attached internal document obtained by F-150Gen14 forums is accurate, the fourteenth generation of the world’s best-selling vehicle will offer a wide array of engine options.

Now we’re getting to the interesting part of the chart as the output for the 3.0-liter diesel mill is “TBD.” It could mean Ford is looking to tweak the Power Stroke V6 engine and extract more than the 250 hp and 440 lb-ft (597 Nm) available today. Fans of the Blue Oval would probably want that considering the inline-six 3.0-liter Duramax diesel in the GMC Sierra and Chevy Silverado is more powerful, offering 277 hp and 460 lb-ft (623 Nm).

As for the long-awaited hybrid, it too has a “TBD” output for its electrified 3.5-liter engine. If it will use the same configuration of the 3.5-liter EcoBoost V6 as the non-hybrid model, we’re looking at more than 375 hp taking into account the extra power provided by the electric motor. It could mean the F-150 Hybrid will hit the 400-hp mark, unless Ford plans on using a naturally aspirated 3.5-liter engine, in which case power would be lower. 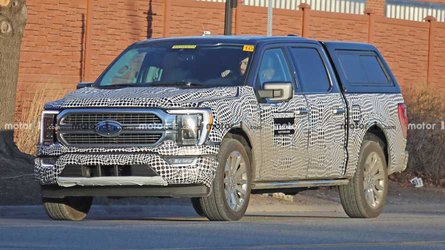 The F-150 Hybrid has been a long time coming considering Ford started talking about electrifying its truck in late 2014 before announcing in early 2017 that it would bring it to the market in 2020. Expect the wraps to come off in the months to come.