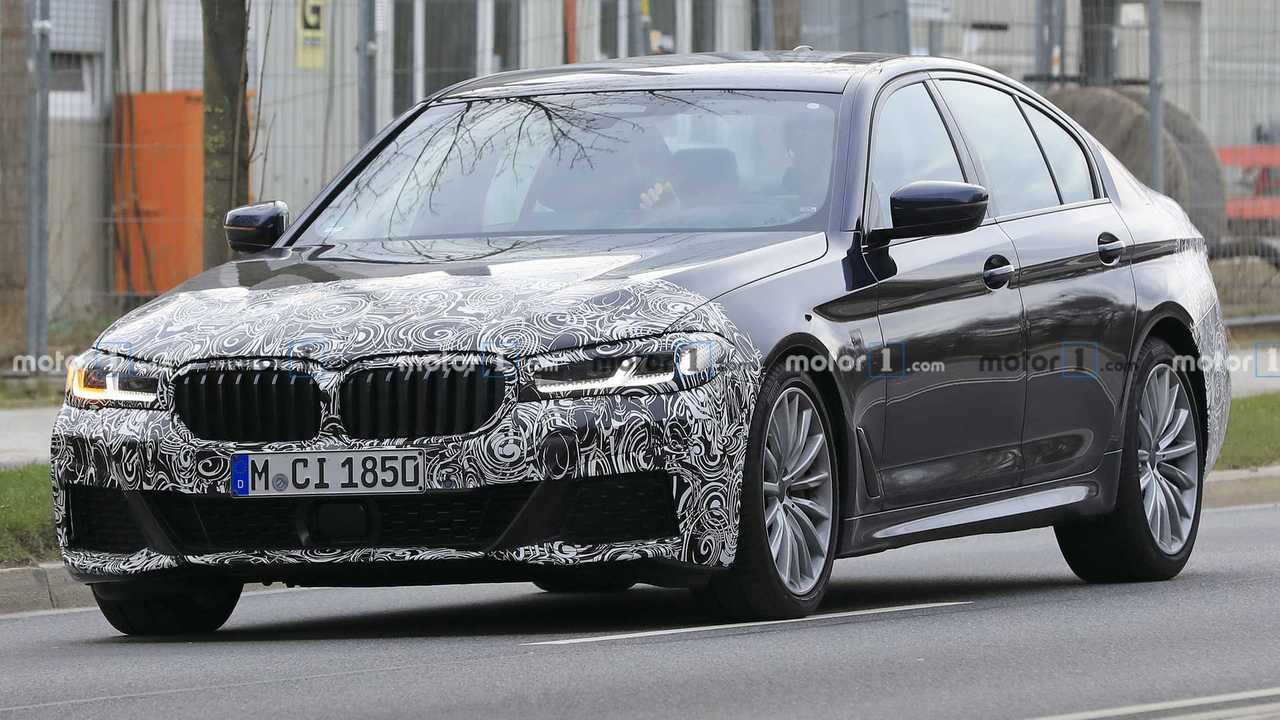 One of the two prototypes we've spotted is an M Sport model.

Using BMW’s fancy terminology, Life Cycle Impulse is how the Bavarian folks are describing the mid-cycle updates their products are subjected to about 3-4 years after a generation’s launch. The seventh iteration of the 5 Series was unveiled back in October 2016 and went on sale early 2017, so it’s almost time for the Audi A6 competitor to get its LCI to remain fresh and competitive and face the recently updated Mercedes E-Class as well.

Our spies just had a tête-à-tête with a couple of prototypes representing the revised 5er, with one being a higher-specification model in the M Sport guise.  You can easily set the two apart by the larger air intakes and wheels of the more expensive trim, not to mention its blue paint compared to the black finish of the lesser prototype. Both have the same exhaust tips, but the ones on the M Sport variant have a black look also noticeable on the front fender ornament.

Even though there’s plenty of camouflage at the front and rear of both prototypes, you can easily tell the cars had new headlights and taillights. Our spies were able to take photos while the two were making a right, thus revealing the updated turn signals. It’s the one at the back that caught our attention as the LED light strip has been moved from the top to the bottom of the cluster in the same vein as the latest 3 Series.

Some changes to the front and rear bumpers are also planned for various trim levels, but nothing to write home about. We are happy to report the size of the kidney grille will not increase substantially with the mid-cycle facelift, which is something we can’t say about other recent products from BMW. The interior is highly unlikely to go through massive changes since this is not what the company usually does with LCIs. That said, we’re expecting the latest versions of the digital driver’s display and the iDrive infotainment system, along with possibly even more safety tech.

To avoid a midlife crisis, the 5 Series is rumored to get a 545e plug-in hybrid variant borrowing the setup from the larger 745e xDrive with a combined output of 388 horsepower from a six-cylinder 3.0-liter turbo and an electric motor. It should translate into some decent performance considering the heavier 745e needs 4.9 seconds to hit 60 mph (96 km/h), which isn’t half bad considering the one we tested weighed nearly 4,850 pounds (2,200 kilograms).

Beyond the new plug-in hybrid variant, BMW is also said to be working on a limited-run M5 CS special edition. We actually caught a camo-free prototype back in October 2019 riding on gold wheels and carrying a “CS” badge, so we know it’s probably coming soon. We’ve heard through the grapevine a new twin-turbo V8 is in the works with more than the 617 horsepower offered by the M5 Competition, but it’s not due for another couple of years. Codenamed “S68,” the engine is said to be significantly more compact than the current mill and will reportedly represent a “drastic upgrade.”

The 5 Series Is Getting A Nip And Tuck:

Meanwhile, the standard 5 Series in both Sedan and Touring flavors should be out in Europe before the end of 2020.