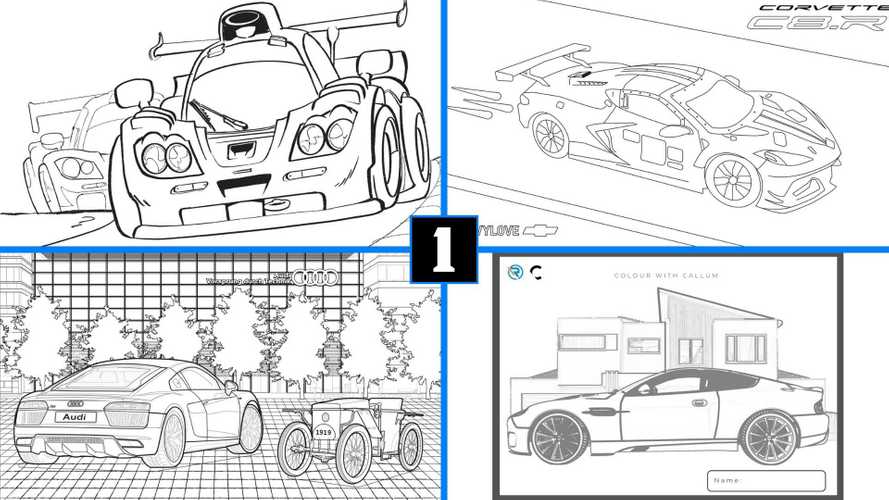 Get out the box of crayons and start coloring.

A lot of folks are stuck at home right now, and you can only stare at a screen for so long before your eyes start to get tired. Automakers and artists are coming to the rescue by releasing free coloring book pages that folks can print out.

Some of the images in our gallery below crop the original photos or reduce their resolution. So there's a link to the source in each section of text.

Rendering artist Abimelec Design has released a handful of coloring book pages that feature some of his interesting creations, like a six-wheeled Lamborghini LM002, a lowered Lincoln wagon, and his mashup of a Fox body Ford Mustang and Ferrari F40.

Audi released a 13-page coloring book as a pdf that you can print out. The pages include several shots of the R8, some of the brand's current crossovers, a Quattro rally car, and classic Horch touring car.

Since leaving Jaguar, Ian Callum has set up a new design studio. His first project there is the Aston Martin Vanquish 25 that aims to upgrade the model from 2001 to modern standards. As part of a coloring contest, the company also has three whimsical images showing the car with a modern house, a smiling moon, and an elephant.

There's a lot of love for the new Chevy Corvette C8, and the Bowtie is making it easy to celebrate America's sports car by releasing six coloring pages of the car. There's even one for the C8.R race car.

Chevy has upgraded its Pinterest page to offer coloring book pages for vehicles other than the Corvette. The latest additions are pictures of the Silverado and Silverado HD.

Ford has released six pages, including a connect-the-dots puzzle for the Mustang. Here's where you can find them all.

Artist Jonsibal has put eight images on his Facebook page. He also partnered with ten other artists to release a whole batch of coloring book pages on Google drive. His drawings are the only ones that are automotive related, but if you're stuck at home, they still should be a good way to spend some time.

Lexus offers people a chance to color images of its LC halo car. There are pictures of the grand tourer in its racing form and as a street-legal machine.

Mercedes-Benz has released a massive collection of images for you to color. There's a 29-page coloring book that's available as a pdf file that includes a variety of the brand's classic and modern machines. There are also 49 design sketches that don't have quite as much detail but still provide options to explore your creativity.

Morgan Development Engineer James Waller is working on a children's book about the long-lived British automaker. He let the company publish four of his sketches as coloring book pages. They depict a modern Morgan Three-Wheeler, a Plus Six, the workshop with unfinished vehicles, and a transporter hauling models away.

Nissan has 23 coloring pages of its models, and the subjects ran the gamut of the company's history. Whether the recent Ariya concept or classic Datsun 510 is more your style, then there's something to pick in this collection.

Artist Will Pierce draws all sorts of mechanical things from cars to robots and commonly uses a deformed style that makes the machines look like they belong in a cartoon. To keep folks entertained at home, he has released two full coloring books that focus on Group 4 and Group B rally cars from the 1980s. He also put out a variety of other images ranging from Porsche race cars to a lifted Suzuki Jimny. You can download it all from his Dropbox link.