Novitec Maserati Levante Esteso Is One Angry SUV With 616 HP 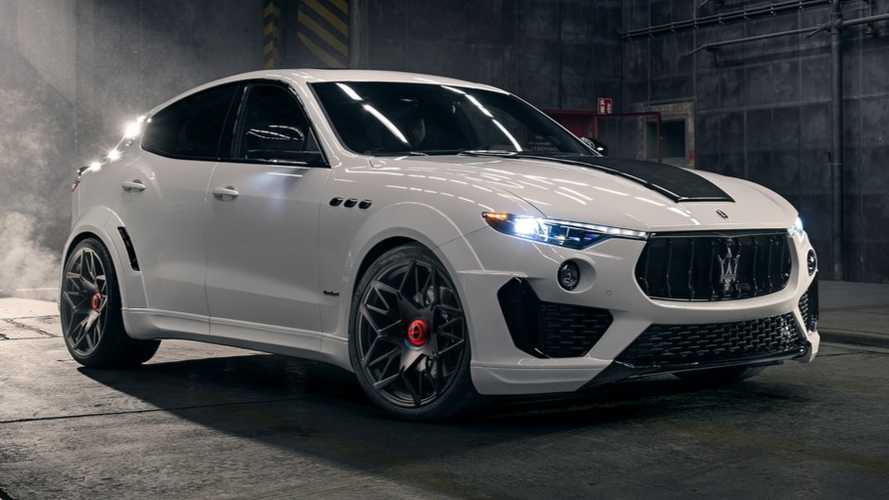 Can't wait for the Ferrari SUV? This tuner has the alternative.

The closest thing to a Ferrari SUV right now is the Maserati Levante Trofeo with its twin-turbo 3.8-liter V8 engine built by the Prancing Horse. It makes 580 horsepower and 538 pound-feet (730 Newton-meters) of torque, which should be plenty of Maranello punch for most people, but some folks will always want more. This is where the tuners at Novitec come into play as they’ve fiddled with Ferrari’s V8 to unlock a mighty 616 hp and 605 lb-ft (820 Nm).

They did more than just upgrade the engine as Maserati’s sole SUV (for the time being) went to the gym to put on some muscles. It’s now 2.09 meters (82.2 inches) wide after Novitec installed its fender flares both at the front and rear to increase the width of the vehicle by more than 10 cm front & 12 cm rear. The entire body kit encompasses eight pieces and some of them can be had in bare carbon fiber, including the hood scoop and rear spoiler to make the high-riding Maserati a truly eye-grabbing SUV.

Novitec also made some changes to the air suspension setup by lowering the ride height by 25 millimeters to lend the Levante a more aggressive stance while improving handling thanks to a slightly lower center of gravity. You’ve probably noticed by now those are not the stock wheels as the tuner has swapped them out to make room for a 22-inch set in “centerlock look.”

As far as performance is concerned, Novitec says the extra oomph over the stock Trofeo version allows the Levante Esteso to hit 62 mph (100 km/h) from a standstill in 3.8 seconds and top out at 192 mph (309 km/h) or slightly more than the world’s fastest production SUV, the 190-mph Bentley Bentayga Speed.

What Else Has Novitec Been Up To?

It’s worth mentioning that spy shots have revealed the Levante Trofeo is due to receive an update that will bring a larger 4.0-liter V8 developed by Maserati.