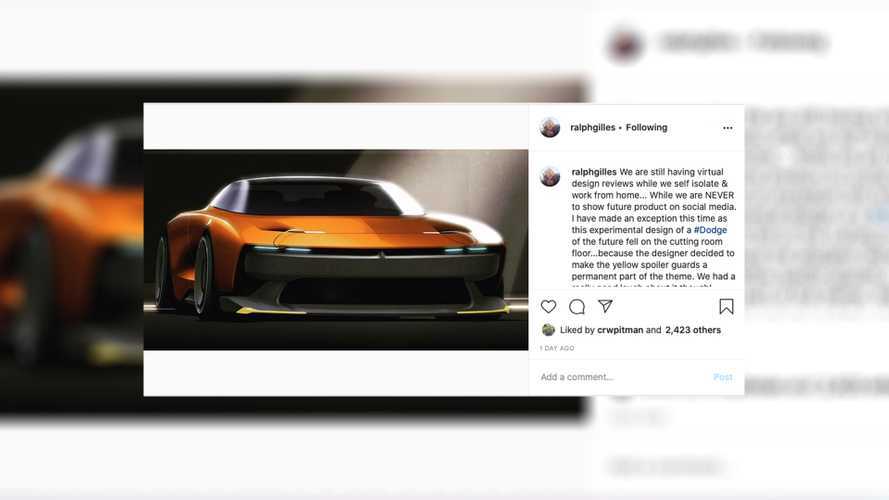 This would eliminate any controversy.

We often view automakers as singular entities – manufacturing behemoths in an industry that employs hundreds of thousands of people around the world. We rarely get to peek behind the curtain, though. For every new model are countless variations left on the cutting room floor – alternative, bold designs that never see the light of day. That is unless the automaker wants to show you how the sausage is made. Ralph Gilles, Fiat Chrysler Automobiles design boss, did just that with an Instagram post, showing off one such Dodge design that we were never supposed to see.

The lone pic shows a bold, futuristic, and unlikely Dodge design, with a wild front end, sweeping body lines down the side, and no door handles – or side mirrors. One of its most striking features, besides the hood pins and cables – is the yellow front splitter guards. Gilles jokes that they abandoned the design “because the designer decided to make the yellow spoiler guards a permanent part of the theme.” He added that the team all had a good laugh about it.

If you’ve seen a Dodge recently with the yellow guards still in place, then you understand why the design is funny. It’s not uncommon to see Dodge vehicles with the guards still in place, though, according to Dodge, they were never part of the car’s original design, and are supposed to be removed before customers take delivery. They first started to appear on SRT Charger and Challenger models in 2015 to protect the vehicle during transit, but owners, for some reason, like the little splash of yellow at the lower front corners of their cars.

Dodge Challenger, Other Four Cars Get Huge Discounts In March

Hyundai Dealer Will Sell You New Ram 1500... In Bulgaria

The rejected Dodge makes them part of the car’s design, removing any controversy about whether they should or should not be removed. Though Dodge could be adding fuel to the fire as it switches from yellow guards to pink. It won’t be hard to spot the changes.