Ford Bronco Sport Spotted Next To 2020 Explorer In Parking Lot 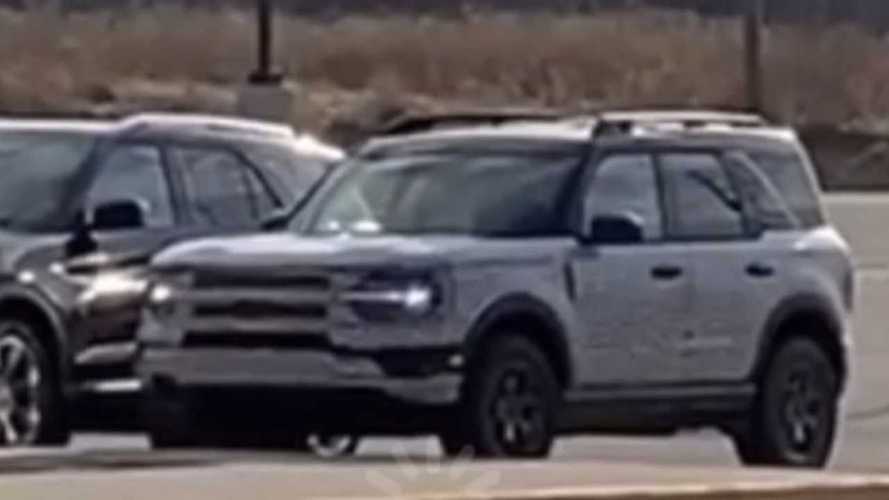 It's a little, rugged-looking crossover.

A member of the Ford Bronco Sport Forum managed to take a brief video of the upcoming crossover sitting next to an Explorer. While we can't embed the whole clip, the image above is a screenshot from it. Check out the thread to see the whole thing.

Because the photo comes from a distance, the Bronco Sport looks pixelated when zoomed in. It's hard to tell for certain whether the vehicle wears a camouflage wrap along the lower portion of the body. This could also be one of the multiple gray colors available for the crossover, which includes Area 51, Cactus Gray, and Carbonized Gray.

For an even better look at the new Bronco Sport, check out the photos above that show the crossover without concealment. The model's upright body and chiseled lines hide its close relationship with the Ford Escape. The front end has a similar circular headlight design as the full-sized Bronco. At the back, it appears to be possible to separately open the glass portion and the hatchback. This setup is convenient for loading small items into the cargo area.

Here's Everything We Know Yet About The Bronco Sport:

The recently leaked dealer order guide indicates that the Bronco Sport is available with either a 1.5-liter EcoBoost or 2.0-liter EcoBoost engine. Assuming the same outputs as the Escape, the 1.5-liter would have 180 horsepower (134 kilowatts) and 177 pound-feet (240 Newton-meters), and the 2.0-liter would make 250 hp (186 kW) and 275 lb-ft (373 Nm) of torque. An eight-speed automatic is the only listed transmission.

Some of the Bronco Sport's trim levels will include the Big Bend, Outer Banks, Badlands that will get their names from national parks in the United States. Look for full details about the crossover when the model debuts, which could be as soon as April.