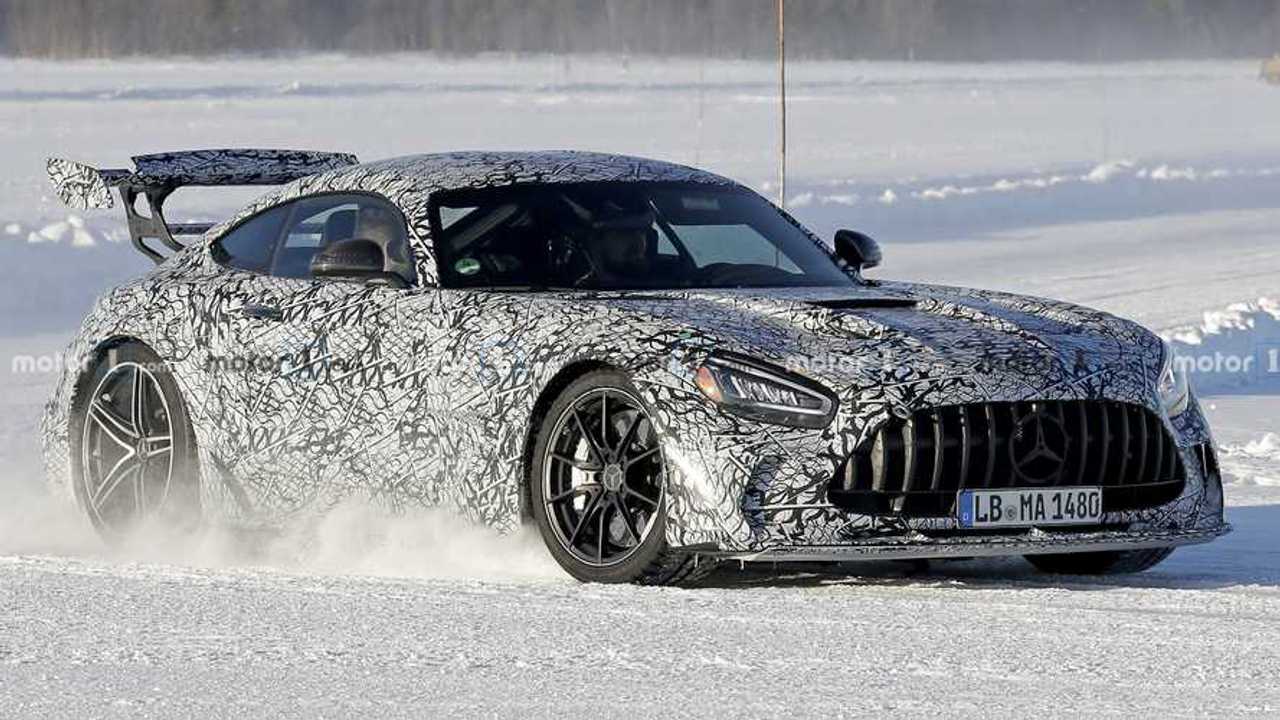 We also have spy shots of another prototype spotted at the Nürburgring.

[UPDATE] 13 new spy shots have been added at the gallery at the end.

Mercedes-AMG might have started the teasing game for the next GT with that video showing Lewis Hamilton and a swoopy coupe clay model, but the best is yet to come for the current model. We’re talking about the Black Series set to serve as a last hurrah for the high-performance coupe before the generation change. Our spies have now caught a couple of prototypes of AMG’s bad boy, one racking up the miles at the Nürburgring and the other playing in the snow in northern Europe.

These look way more aggressive than the GT R we’re all familiar with, up to the point you might confuse them for one of the GT3 and GT4 race cars developed by Mercedes-AMG. From the hood vents and massive splitter at the front to the quad exhaust and gargantuan wing with an adjustable flap at the rear, you can easily tell this is Affalterbach’s hotly anticipated track monster.

There are a couple of differences between the two Black Series prototypes as the one captured at the Green Hell appears to have a roll cage behind the seats while the one shot in wintery conditions doesn’t. The latter has orange graphics in the headlights, suggesting it’s a prototype for the U.S.-spec model. They both ride remarkably low to the ground, but the one seen in Germany appears as if it’s glued to the road.

Power has been confirmed to come from a new twin-turbo 4.0-liter V8, with AMG officials hinting it would produce somewhere in the region of 700 horses. Aside from getting a beefier engine, the Black Series will probably have a series of chassis, suspension, and brake upgrades, not to mention a lower weight thanks to more carbon fiber.

We've Spotted The Black Series Before:

These are all ingredients for a new lap record holder at the Nürburgring for a production car, which would dethrone the Lamborghini Aventador SVJ (6:44.97). AMG’s boss Tobias Moers has suggested it might go after the Superveloce Jota’s title, so 2020 is shaping up to be an interesting year if you’re keeping an eye on ‘Ring lap times.