All hail the Jet 'Vette!

There’s no witty opening paragraph for this tidbit of automotive insanity. What you see in the above video from Barcroft Cars is indeed a jet-powered 1978 Chevrolet Corvette. It doesn’t have a massive turbofan with an afterburner pulled from an F-22 Raptor, or any front-line fighter for that matter. Still, the gas turbine under the C3’s long hood sounds like a proper jet, and it does generate no less than 880 horsepower (656 kilowatts). Ladies and gentlemen, we present for your viewing pleasure the Jet ‘Vette.

The engine swap is certainly impressive, especially when considering just how stock this car looks from the outside. Big set of wheels notwithstanding, one would assume this is a typical 1970’s era Corvette. That would change, however, when the Pratt & Whitney ST-6B gas turbine comes to life. Originally designed for helicopter use, the engine just fits under the C3’s nose but it does run into the firewall just a tad. It’s a shaft-driven jet as opposed to thrust-driven, so it’s connected to an automatic transmission sending power to the rear wheels.

Jet Engine All The Things: 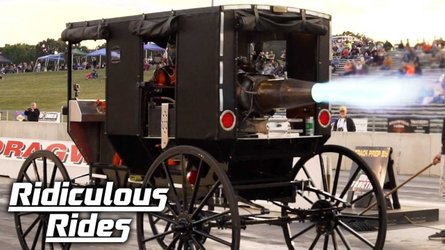 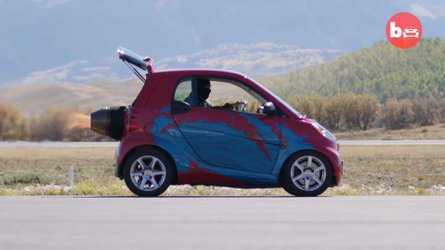 Someone Put A Bonkers Jet Engine Into A Smart ForTwo

The big condenser at the front of the engine bay is for the Corvette’s functional air conditioning. Yes, this jet car offers creature comforts, and we suspect it’s especially welcome here since the jet’s exhaust can reach temperatures over 1,000 degrees Fahrenheit. A custom exhaust system encompasses a majority of the Corvette’s underbody, exiting through a diffuser at the rear spanning the entire width of the car.

There are other challenges associated with an 880-hp jet engine in a small two-seat sports car. Among other things, it is a tad noisy for daily use. The video mentions the turbine’s thirst for fuel, though exactly how much is consumed per mile isn’t revealed. There’s also the power, but the maximum output isn’t really the issue here. Rather, the minimum output makes this car very tricky to drive. Even with the engine spooled to just an idle setting, the car can still run upwards of 90 mph. It requires very firm pressure on the brakes, and there’s actually a fifth brake installed to help slow things down.

Flex the gas pedal, however, and this car can reportedly reach 60 mph in under three seconds. Flat out it will go 180 mph, which is nearly as fast as the siphon this car creates on a bank account. It was built some time ago at a cost of $550,000, but to build it today would likely cost upwards of $800,000. Yikes.

This crazy Corvette is currently the star attraction at the Rock ‘N roll Car museum in Austin, Texas.