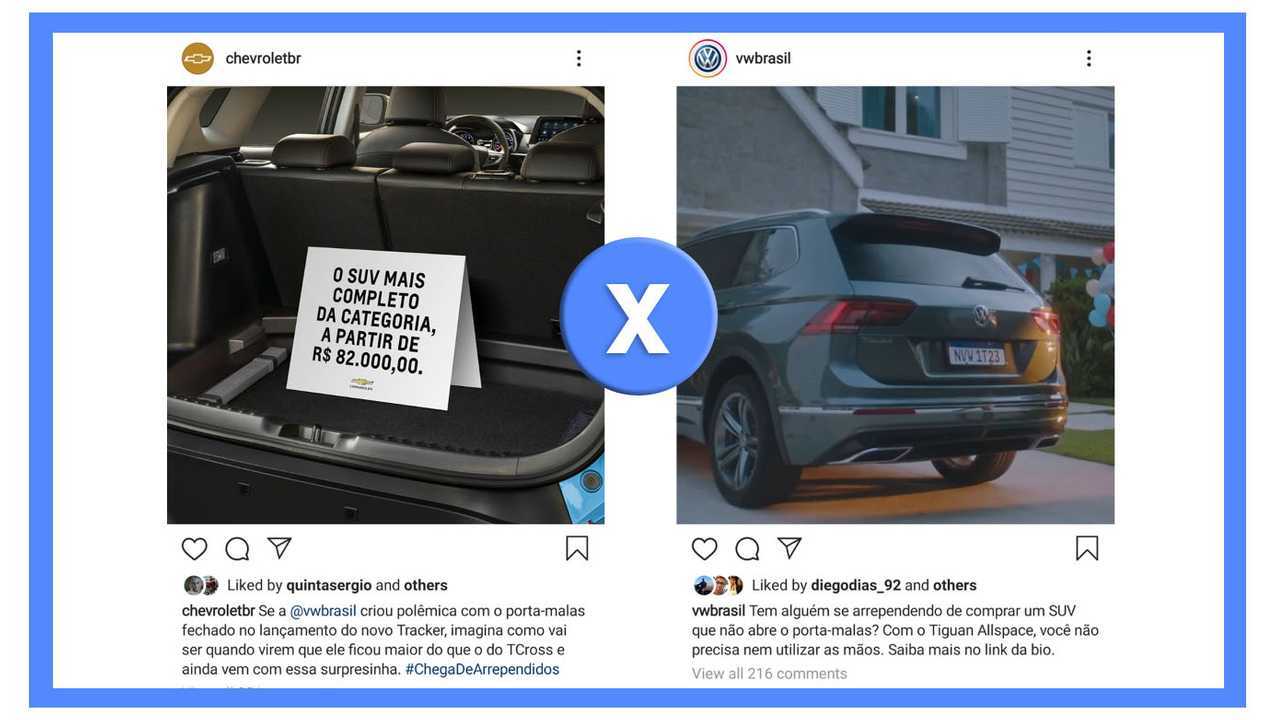 It looks like we're going to have a war between Chevrolet and Volkswagen, at least on social media in Brazil where the 2021 Chevy Tracker compact SUV was recently presented in an online event. The Tracker is offered in South America, but things didn't go according to plan for GM during the recent event and VW decided to poke some fun. Thus the war-of-words began.

Specifically, VW made fun of GM for not opening the rear hatch during the small SUV's official presentation. As such, the Detroit-based brand counterattacked on Instagram, extolling that its compact SUV is the most complete in its segment for the region, costing less while providing more space than the VW T-Cross.

Roughly translated, the above Instagram post from Chevrolet reads: "If @vwbrasil created controversy with the hatch closed at the launch of the new Tracker, imagine how it will be when they see that it's bigger than the T-Cross and still comes with this little surprise." The photo shows the boot of the Tracker with a sign that says "the most complete SUV in the category, starting at R $82,000.00." In U.S. dollars, that currently equates to $16,347.

This was in response to VW's initial Instagram post (above) criticizing GM for not opening the Tracker's hatch. Translated to English, the post reads: "Is anyone regretting buying an SUV that you can't open the hatch on? With Tiguan Allspace, you don't even have to use your hands." Yes, we're aware that Chevy's response pivoted away from the Allspace to the T-Cross. Take it as you will.

The Chevy faux pas with the rear hatch being locked can be seen in the video below. Apparently, the vehicle wasn't in park, which keeps the hatched locked in all situations. With the reveal being live, the presenters didn't investigate the issue further and simply moved on without opening the hatch.

It seems there's more to this feud than just these posts, however. The tit-for-tat apparently started with GM's ad campaign for the new Tracker. In it, people discuss "regrets" and complain about buying an SUV from one of Chevrolet's competitors, highlighting problems such as fuel consumption, capabilities, and aesthetics. It sounds suspiciously similar to Chevrolet's "real people" ad campaign in the U.S. that has occasionally drawn criticism.

Judge Me By My Size, Do You?

So far, only VW has waged internet war against Chevy for its livestream slip-up. Will the Germans in Brazil escalate this situation to DEFCON 1 with a snarky response to Chevy's comparison with the T-Cross? The compact SUV segment is arguably the most competitive in the entire automotive realm, so bragging rights – and egos – are certainly on the line here. Grab your popcorn, folks.