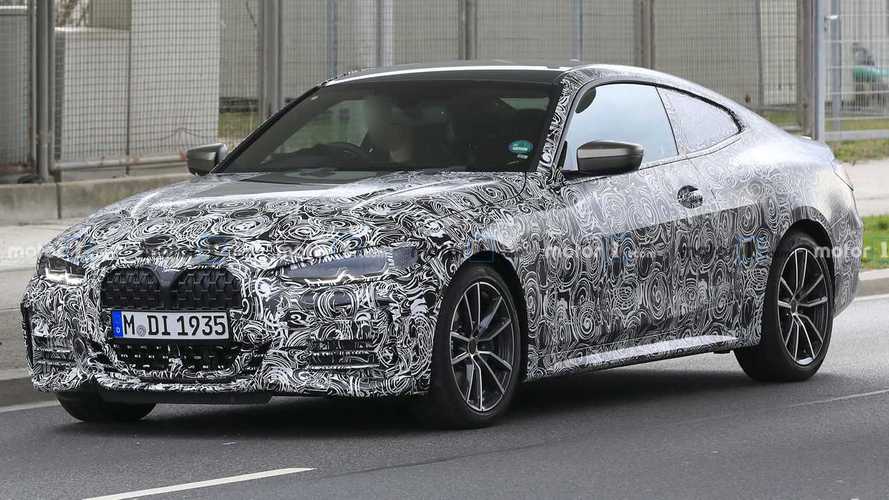 Does the controversial kidney grille look better now that it has a license plate?

With the Concept 4 unveiled at the 2019 Frankfurt Motor Show, BMW signaled a rather radical styling change planned for the next-generation 4 Series Coupe. We’re obviously talking about a reinterpretation of the corporate kidney grille harkening back to models of yesteryear, but in an oversized form to match the significantly bigger proportions of current cars.

We’ve seen our fair share of spy shots with the new coupe and its convertible sibling, but this is by far our best look at the updated front fascia as the vertical grille is now almost entirely exposed. Maybe it’s because of the license plate, but it doesn’t look as large as the one installed on the concept. That’s arguably for the better as many people have complained about the showcar’s unusually big grille.

It appears to be what BMW refers to as an “Active Air Stream Kidney Grille” as the flaps seem to be all closed to improve the car’s aerodynamic efficiency. Whenever the engine needs more air to cool down, the flaps automatically open. Without the thick chrome frame the Concept 4 had, the grille looks less flashy and dare we say better. Depending on the trim level and optional packages, chances are the 4 Series Coupe will be offered with both this blacked-out look and the more shiny finish of the showcar.

Beyond the grille, the blue brake calipers and the shape of the dual exhaust tips lead us to believe this is actually the hotter M Performance version. Slotted right below the full-fat M4, this right-hand-drive prototype could depict the M440i representing a two-door version of the 3 Series Sedan-based M340i. The four-door model is offered with both rear- and all-wheel drive, with power coming from a turbocharged inline-six 3.0-liter engine rated at 382 horsepower and 369 pound-feet (500 Newton-meters) of torque. Those output numbers make the M340i the most powerful non-M 3 Series ever.

2021 BMW 4 Series Convertible Caught With The Top Down
⠀

Side note – BMW recently launched an M340d sedan and wagon in Europe with a diesel 3.0-liter straight-six pushing out 335 hp and a massive 516 lb-ft (700 Nm). It’s too soon to say whether an equivalent 4 Series Coupe will follow, but with diesels still quite popular in some parts on the Old Continent, it might just happen.

Expect the next-generation 4 Series Coupe to debut later this year with a slightly toned down appearance compared to last year’s concept and just about the same oily bits and tech as the latest 3er.