Sleek silhouettes and lots of power.

For many people that desire practicality and everyday livability, an SUV or crossover would be the first choice. But for those who seek the versatility of four doors and a sizable boot coupled with impressive driving dynamics and performance, then there's the super saloon; basically a practical family sedan with horsepower numbers that your wife need not know about. These cars are supreme highway cruisers, daily grocery getters, and wouldn't look out of place with your supercar buddies on the weekends. And Mat Watson wants to put three luxurious super saloons against each other in another carwow drag race. So, it's Porsche versus Audi versus Bentley, and the participants are all making at least 600 horsepower.

Starting with the first contender, the quintessentially British Bentley Flying Spur is essentially a Continental GT with four doors. It's the most expensive car among the three at $207,000 when converted and weighs in at 5,300 pounds, making it the heaviest, too. Under the hood is a 6.0-liter W12 twin-turbo engine that makes 635 horsepower and 664 pound-feet of torque with all-wheel drive, an eight-speed dual-clutch auto, and launch control.

From Supercars To Compacts And Even Vans: 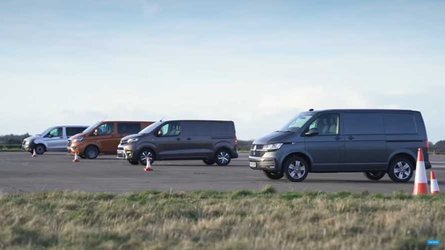 Four Vans Fight In One Of The Slowest Drag Races Ever
⠀ 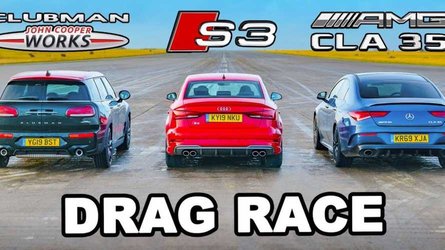 Starting with the first of the two Germans is the Panamera Turbo S E-Hybrid, rocking a 4.0-liter twin-turbo V8 with an electric motor, making a combined 680 horsepower and 627 pound-feet of torque. It's also got an eight-speed dual-clutch auto, launch control, and all-wheel drive. It tips the scales at just over 5,000 pounds and comes in at $172,000. Lastly, we have the Audi RS7 Sportback, the cheapest at just a little over $119,000, and the lightest at just 4,630 pounds. Horsepower is the lowest of the three at just 600 and the torque figure is at 590 pound-feet coming from the 4.0-liter twin-turbo V8. It also has launch control and all-wheel-drive, but a normal torque converter eight-speed automatic.

So, who will actually take the crown? The Bentley is definitely the most opulent of the three, the Audi has the lightest and most value, and the Porsche has the trick hybrid system going on. But this is all about performance and speed. Watch the video above to find out.