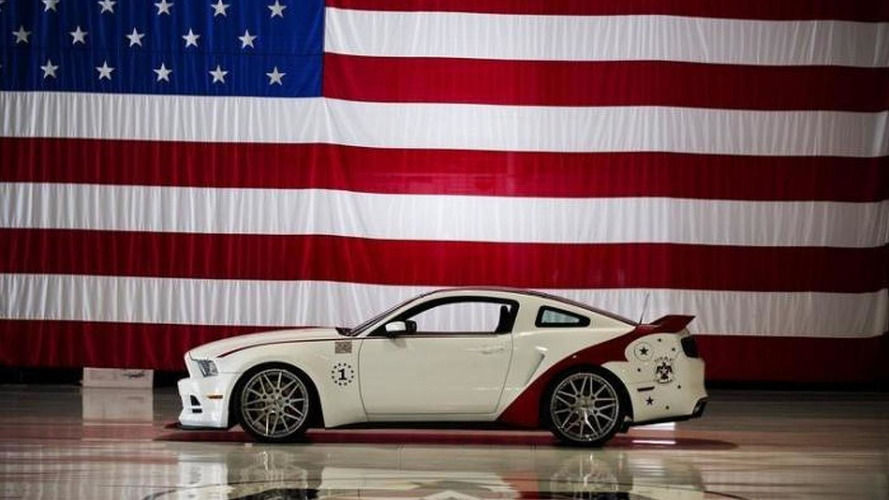 The 2014 Ford Mustang U.S. Air Force Thunderbirds Edition was sold for 398,000 USD at the Young Eagles auction part of the EAA Gathering of Eagles gala.

The 2014 Ford Mustang U.S. Air Force Thunderbirds Edition was sold for 398,000 USD at the Young Eagles auction part of the EAA Gathering of Eagles gala.

The car is based on a 2014MY Ford Mustang GT and was created to celebrate the 60th anniversary of the U.S. Air Force Thunderbirds. The winning bidder was James Slattery from San Diego, California who paid 398,000 USD. All proceeds will go to the EAA Young Eagles program which has been providing introductory flights since 1992 and over the years have trained more than 1.6 million young people.

This one-off Mustang GT comes with a red, white and blue exterior paint scheme as a reference to the livery used on the Thunderbird F-16 Falcon. It sits on large 22-inch Forgiato alloy wheels and has received a wide body kit together with a glass roof. Ford fitted the car with a sport-tuned suspension, a supercharger and a Brembo brake kit.

It has a VIN 0001 identification number and benefits from several interior modifications like a new instrument cluster, bespoke sill plates and Recaro seats. Ford also installed an updated navigation screen and puddle lamps which project an aircraft silhouette on the ground once the doors are opened.