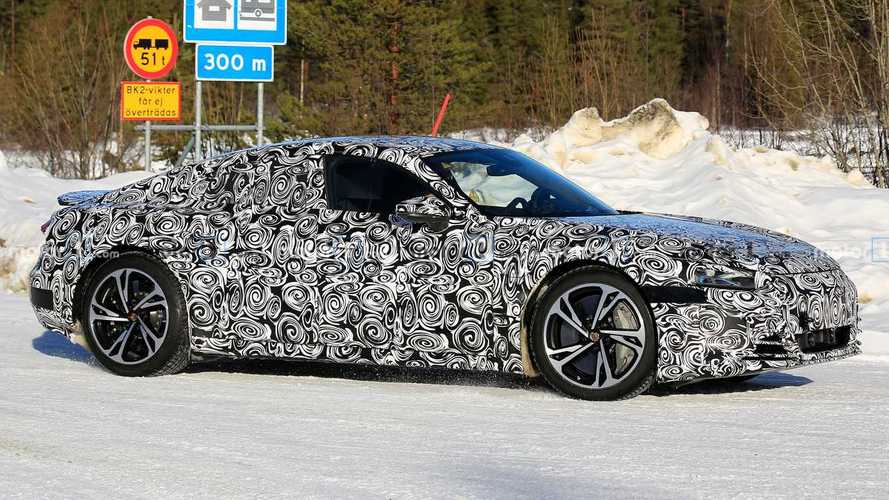 See Audi's version of the Porsche Taycan from many angles.

Our spy photographers currently based in northern Europe are relentless. They keep sending us images of future cars, many of which are entirely electric. After yesterday’s Mercedes EQE, the Audi E-Tron GT has posed for the spy camera with slightly less disguise compared to the prototype spotted last week. The test vehicle had different alloy wheels and thinner camouflage on the front fenders to reveal the charging port caps on both sides, much like the mechanically related Porsche Taycan.

Audi was kind enough to take off some of the swirly disguise applied onto the taillights and now we can see the clusters almost in full. The concept had an LED strip at the back that extended over the entire trunk lid to join the taillights, and while it’s not immediately noticeable on the prototype, we believe it’s there.

Overall, the sensation we’re getting is that the E-Tron GT will be nearly a carbon copy of the concept unveiled in November 2018 at the Los Angeles Auto Show. As previously mentioned, there are some minor changes – traditional door handles and bigger mirrors to name a few – but the electric sedan remains almost entirely faithful to the showcar.

What that means is Audi will soon have an attractive EV on sale to compete in what will become a crowded segment in just a few years. Tesla is about to face more competition not just from the Volkswagen Group, but also from Daimler with the Mercedes EQ models and Jaguar Land Rover with the upcoming fully electric Jaguar XJ we recently spotted.

From Concept To Prototype:

Audi is expected to unveil the road-going E-Tron GT before the end of the year, specifically at the Los Angeles Auto Show in November. Those who have criticized the Taycan for being too expensive will be glad to hear Audi’s variant will likely be more affordable, so look for a high five-figure price for Ingolstadt’s equivalent of the $103,800 Taycan 4S.