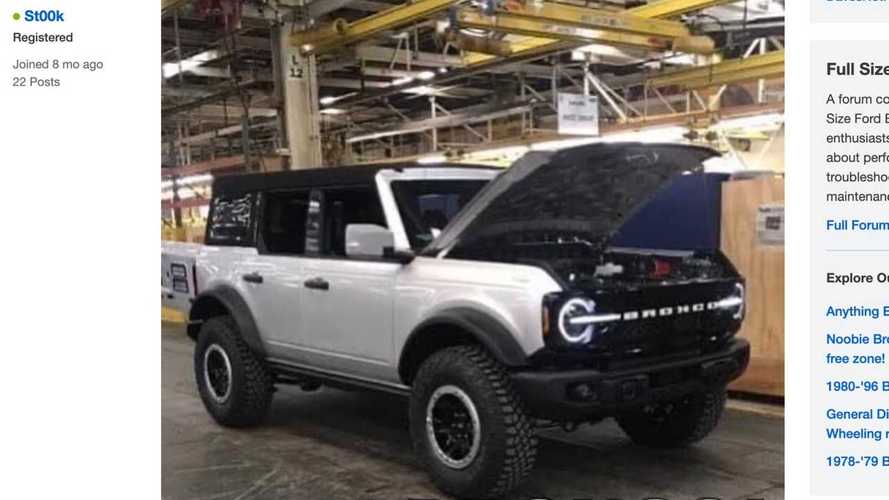 Could it be? Really?

Today might be the best day ever for Ford Bronco fans because, in addition to an image of the smaller Sport leaking out, a shot of the full-sized version is now here, too, from the Full Size Bronco forum. Well, maybe. There are enough reasons to be dubious that you should take this with a grain of salt.

Motor1.com reached out to Ford for comment about the legitimacy of this image. A spokesperson responded: "We don’t comment on speculation or future products."

The image shows the Bronco from a front three-quarter perspective in what appears to be a factory. However, there are things about how it looks that give us pause. First, there's too much of a coincidence for the Bronco Sport and the standard, more rugged model to leak out on the same day.

In addition, the quality of the photo is terrible. Any modern smartphone would be able to snap a higher resolution picture than this. The blurriness could make it easier to pass off a rendering as the real thing, and zooming in closer on the image in Photoshop, there appears to be odd pixel manipulation close up on certain sections of the vehicle. Some of the reflections don't look right, but the low resolution could be an explanation.

2021 Ford Bronco Colors Allegedly Revealed, And Not Just The Names

Looking at the overall design, this is what we generally are expecting from the 2021 Bronco. However, the open tailgate is odd because there appear to be two vents or lights on it, and we aren't sure about their purpose. Perhaps, they are the method for attaching the spare wheel there.

It's minor, but in discussions with the Motor1.com team, we notice that there's no visible antenna. In comparison, the aerial is located in plain sight on the passenger side front fender. Maybe, the piece is still waiting for installation, but that seems odd on a vehicle that looks otherwise complete.

Another leaked image caught the two-door Bronco from the Bronco 6G Forum. In this case, the blacked-out windows suggest that this is likely a full-sized model. The copious windows in the background and art on the walls indicate this photo might come from a design studio.