The Chevy Express is one of the oldest vehicles still on sale today, second only to the Ford E-Series (which, the company only offers as a rolling chassis these days). I should know, too – I drove several in high school when I delivered medicine and medical equipment for a local pharmacy. They were daily workhorses crisscrossing Southeast Michigan, delivering cholesterol meds and hospital beds, and the looks have changed. While it looks nearly identical to the van Chevy rolled out 26 years ago, the automaker is giving the van one of its most significant updates in years – a new engine.

GM Authority is reporting that Chevy will replace the Express’s aging pair of 6.0-liter V8 engines with its new 6.6-liter V8. Chevy introduced the new, larger engine in the 2020 Silverado HD pickups. The new mill produces 401 horsepower (299 kilowatts) and 464 pound-feet (629 Newton-meters) of torque, pairing to the same six-speed automatic gearbox as before. The new mill is more potent than the gasoline one it replaces, which made 341 hp (254 kW) and 373 lb-ft (504 Nm) of torque.

Looks Like That New Engine Has A Minor Defect:

According to the publication, 70 percent of “Express owners or fleet buyers” opted for one of the available V8 engines, and Chevy hopes the take rate increases or at least stays the same. The new V8 is the van’s optional powertrain. Chevy also offers the Express with either a 276-hp (206-kW) gasoline V6 – the entry-level engine choice – or a 2.8-liter inline-four diesel making 181 hp (135 kW) and 369 lb-ft (498 Nm) of twist. Both of those smaller engines pair with GM’s eight-speed gearbox. 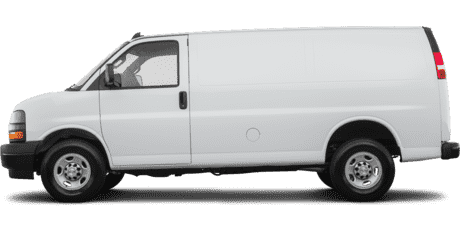 save over $3,400 on average off MSRP* on a new Chevrolet Express Cargo Van

It’s crazy that a model can be on sale for over a quarter of a century without any significant changes. Then again, the only other vehicle that’s older is its crosstown rival van-based platform – the Ford E-Series. Fleet buyers love the Express, and if it’s selling well, why change it? When I drove the Express over a decade ago, they traversed Michigan’s crap roads with few, if any, issues for hundreds of thousands of miles. Functional isn’t always pretty.