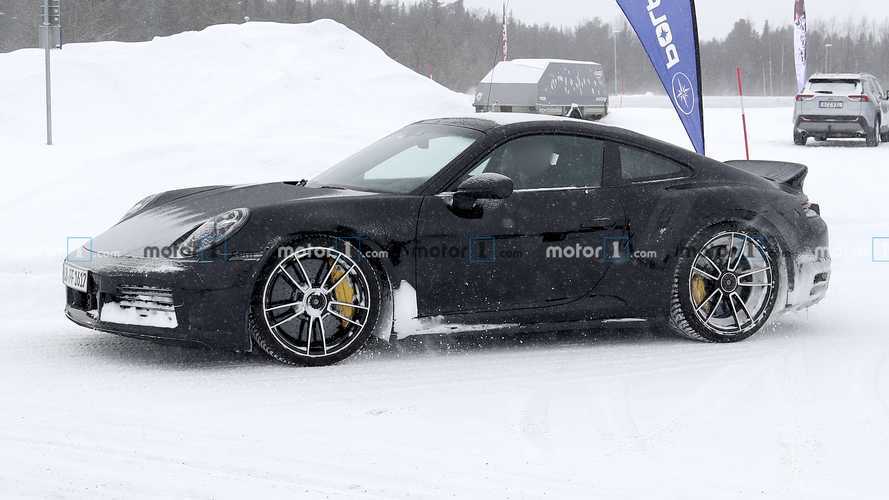 We’re less than a day away from Porsche revealing the all-new 911 Turbo S. Yet our spy photographers continue to capture Turbo S test vehicles still out and about. The latest photos show the 911 Turbo S out winter testing, and, like some earlier spied test vehicles, this Turbo S also sports a duck tail spoiler. It’s still a surprising sight – Porsche put a similar spoiler on the 2010 Porsche 911 Sport Classic – but it raises more questions than it answers.

It’s not clear what the duck-tailed 911 Turbo S is supposed to preview. There could be a new run of limited-edition Sport Classic models based on the Turbo S. Porsche based the previous 911 Sport Classic on the Carrera S, though. The German automaker could also be preparing an even hotter 911 Turbo RS. There are just too many questions and not enough answers from Porsche, though we don’t expect Porsche to sit down for a chat about future products until it’s ready.

Whatever Porsche plans for the duck-tailed 911 Turbo S, it shouldn’t be low on power. The new 911 Turbo S is expected to get a significant power increase – 580 horsepower (433 kilowatts) to 640 hp (447 kW). However, final power figures aren’t finalized. Torque should see a similar increase – 553 pound-feet (750 Newton-meters) to 590 lb-ft (800 Nm). Powering it will be an updated version of Porsche’s twin-turbocharged 3.8-liter flat-six engine, pumping the power through an eight-speed, dual-clutch automatic gearbox to all four wheels.

With Porsche revealing the new 911 Turbo S tomorrow, we shouldn’t have to wait too much longer to find out about the duck-tailed model. It could be a new special edition or something else entirely, and that has us intrigued.