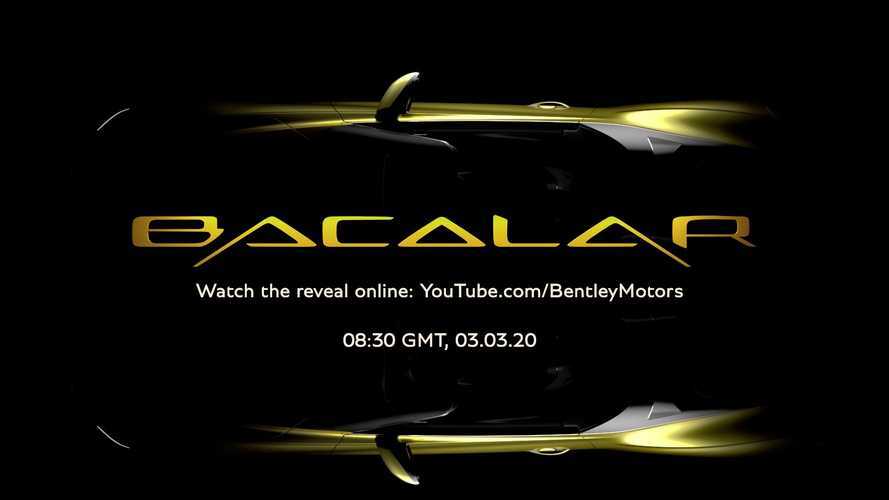 As with many new cars scheduled to debut this week, the Bentley Bacalar prepared by the Mulliner coachbuilding division was supposed to premiere in Geneva. That’s not going to happen anymore, but the show’s cancelation is not forcing the peeps from Crewe to push back the vehicle’s reveal as the ultra-exclusive two-seater is still on track for a March 3 reveal.

Due to be unveiled during a “digital press conference,” the second two-seat Bentley since 1930 is back in a third and final teaser providing an aerial view of the fancy car. Rumors of an ultra-expensive vehicle carrying the “Flying B” logo have been swirling around the Internet since late last year, and it appears the Bacalar will indeed allow drivers to feel the wind in their hair.

Described by insiders as being the “ultimate open-cockpit sports tourer,” the Bacalar is inspired by the EXP 100 GT concept and is expected to be roofless in the literal sense. Much like the McLaren Elva and the Ferrari Monza, the new Bentley is believed to come without a roof. That sounds just about right considering the rear deck doesn’t seem to be big enough to accommodate even a soft top, let alone a metal roof.

Not only will the body style be different than the aforementioned EXP 100 GT coupe, but also the powertrain. Created to “exaggerate the sensation of driving,” the road car will likely eschew the concept’s electric powertrain for the company’s 6.0-liter W12 engine with a pair of turbochargers good for at least the already available 626 horsepower and 664 pound-feet (900 Newton-meters) of torque.

With no roof at all and two fewer seats, the Bacalar should prove to be significantly lighter than the Continental GT Convertible. The diet is exactly what the doctor ordered considering the British droptop weighs 2,414 kilograms (5,322 pounds). The weight loss should contribute to a performance boost over the 3.8 seconds needed by the Conti GTC to complete the 0-62 mph (0-100 km/h) sprint en route to 207 mph (333 km/h).

Join us tomorrow for the livestream and the reveal article about the Bentley Mulliner Bacalar when we will get to learn if it actually costs £1.5 million. If that rumor will end up being accurate, we’ll be looking at a $1.9-million car. That's still "relatively affordable" compared to the $3.5M Grand Convertible.

(Crewe, 02 March 2020) Following the cancellation of the Geneva International Motor Show, Bentley Motors will be holding a digital press conference at 08:30am GMT on 3 March 2020 to unveil the Bentley Mulliner Bacalar.

The Bentley Mulliner Bacalar will be only the second two-seat Bentley since 1930.

The press conference will be streamed on the Bentley Motors YouTube channel www.youtube.com/BentleyMotors

Exquisitely hand-built by Bentley Mulliner, the oldest coachbuilder in the world, the Bacalar represents Grand Touring at its most exhilarating.  Sustainable and ethically-sourced materials are fused with a beautiful yet dramatic design inspired by Bentley’s centenary concept car, the EXP 100 GT.

The two-seat layout and wraparound cockpit of the Bacalar creates a luggage space behind the exquisitely stitched front seats, occupied by a bespoke pair of travel cases trimmed to match the interior materials, all of which are sustainably sourced.