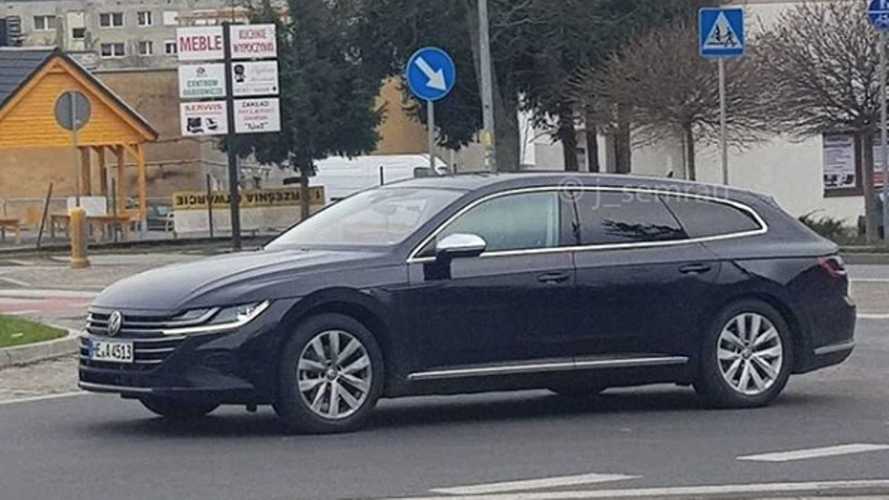 The VW Arteon wagon has been spied testing in Europe showing off its sleek design. The Arteon is quite a looker in sedan form, blending an aggressive front end with the sloping rear end of a four-door coupe, but the upcoming wagon somehow improves upon the Arteon’s already striking design.

VW’s Audi A5 based luxury sedan blends sleek lines with a well-appointed interior as the flagship luxury offering from VW. The Arteon is powered by VW’s ubiquitous 2.0-liter turbocharged inline-4-cylinder TSI engine which produces 268 horsepower and 258 lb-ft of torque in this particular trim

For the US market, the stout TSI engine is mated to VW’s torque converter 8-Speed automatic transmission instead of VW’s dual-clutch offered in sportier vehicles. In Europe, customers can choose a diesel option or a detuned 2.0-liter turbocharged engine. All European Arteons use a 7-speed dual-clutch instead of the 8-speed auto found in American Arteons.

Rumors surround a possible performance trim of the Arteon. According to VW insiders, a 400 horsepower Arteon R is on the way. Instead of an ordinary 2.0-liter turbocharged inline-4, the Arteon R is rumored to use a new version of VW’s legendary VR6 engine. This high-performance Arteon rumor is quite exciting but nothing beats news of a new luxury wagon.

This isn’t the first time we’ve seen shots of the Arteon wagon. The Arteon wagon was spied while cold-weather testing in Sweden. During this particular test, VW tried to disguise the Arteon as a Passat but our eagle-eyed team wasn’t fooled. Now the Arteon wagon surfaced while driving on the streets of Europe looking very close to production-ready. We expect the Arteon was to debut as a 2021 model and hope it shows up on American shores.