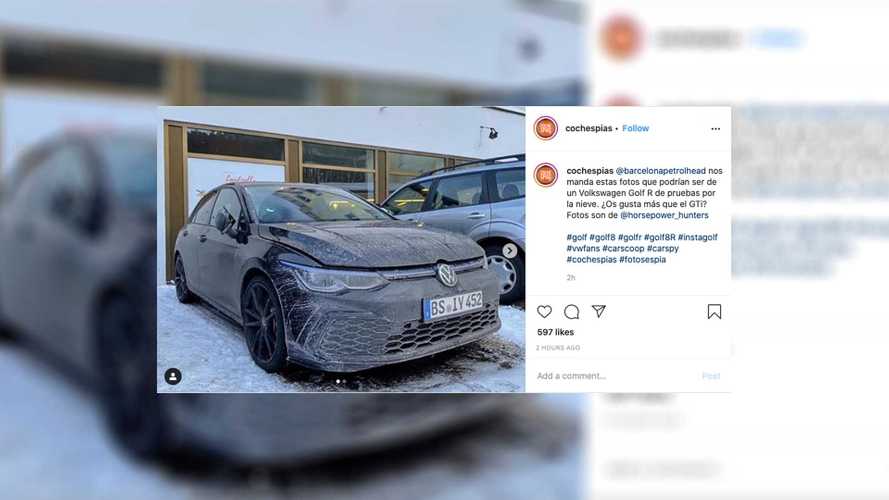 It was just earlier this week when Volkswagen introduced the new, eight-generation Golf GTI to the world. The design may feel a bit familiar, but it still packs the same great personality that’s made it an icon. However, times have changed, and consumers are a fickle bunch to please, so VW is preparing an even hotter Golf R. Spy photos from last week appeared to show the R in all its glory, but a new pic from the Cochespias Instagram page is challenging that.

The new photos show a very familiar design – it looks nearly identical to the new GTI. However, the Golf R from Instagram doesn’t have the same lower front fascia as the car from last week’s spy photos. Those older spy photos showed a Golf R with an angular lower fascia. The newer Instagram pics show the Golf R with the honeycomb grille, just like the GTI. It has the same light bar across the grille, too, though the GTI lettering is absent. If either of the cars are the real deal, then VW won’t have much to reveal when it decides to host a debut for the hot hatch.

The Golf R Isn't A Secret:

Even powertrain information appears to have leaked earlier this year. A slideshow with the power outputs for the eight-generation Golf family appeared to show that the Golf R making 329 horsepower (245 kilowatts). That’d leapfrog the Honda Civic Type R in horsepower. Power will route through a dual-clutch gearbox to all four wheels. There are even rumors of a more powerful, 400-horsepower Golf, too.

Rumors continue to suggest VW will reveal the Golf R later this summer at the Goodwood Festival of Speed. It’s unconfirmed when VW will show it off, but there’s not much left to reveal. It’s also one of the few eight-gen Golf trims we can expect to receive in the U.S., too, so we’re a bit excited to see what we could get.