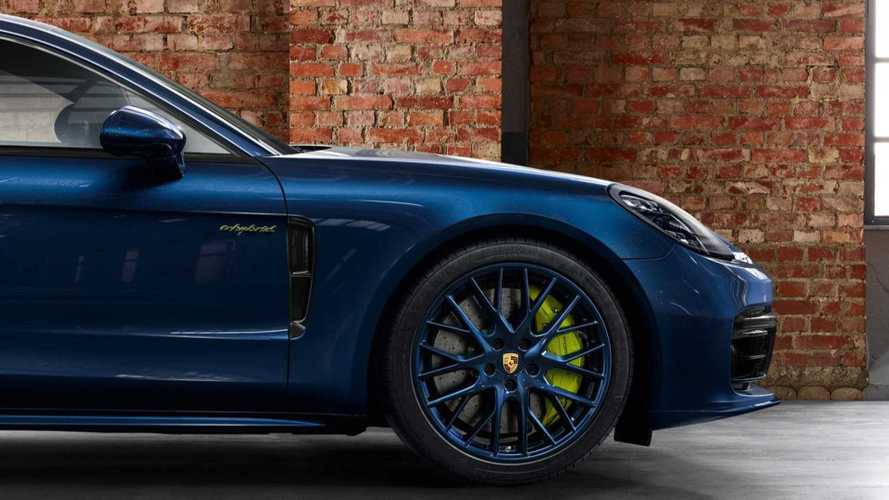 Porsche Exclusive Manufaktur offers a practically endless array of personalization options for the automaker's products. In a new Facebook post, the division shows off a Panamera Turbo S E-Hybrid that wears 21-inch wheels with a Night Blue Metallic finish that matches the vehicle's body.

The dark blue wheels with a V-shaped spoke pattern are attractive enough, but behind them, there are carbon-ceramic, cross-drilled brakes with bright green calipers. The color combo looks fantastic.

In addition to the wheels, this Panamera Turbo S E-Hybrid has the SportDesign package that includes a revised front fascia, side skirts, and rear bumper design. The taillights have the available tinted lenses that darken their appearance.

The Panamera Offers Tons Of Performance:

The Panamera Turbo S E-Hybrid packs a 4.0-liter twin-turbo V8 with electrical assistance making a total system output of 680 horsepower (507 kilowatts). The setup is enough for the sedan to reach 60 miles per hour (96 kilometers per hour) in 3.2 seconds.

Save Thousands On A New Porsche Panamera

The Panamera family has some upgrades on the way. Spy shots show the vehicles getting a very minor exterior styling refresh. We expect there to be similarly tiny changes on the inside. Look for Porsche to use the opportunity to improve the sedan's available tech and maybe even tweak the engine outputs to keep pace with the horsepower wars. Look for a debut later in the year, but not for the now-cancelled Geneva Motor Show because the new 911 Turbo occupies that spot in the unveiling calendar.