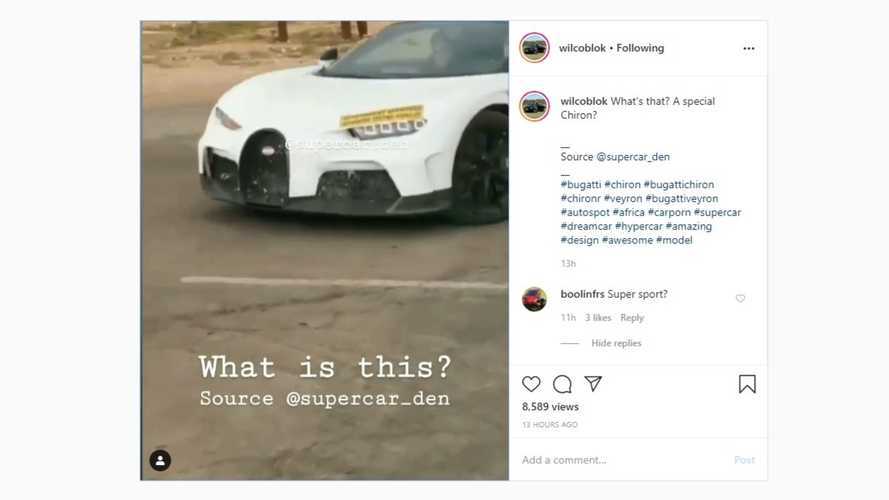 In an interview with The Roadshow last year, Bugatti boss Stephan Winkelmann revealed plans for two new versions serving different purposes to follow the record-breaking Super Sport 300+. Fast forward to about a month ago, the head honcho in Molsheim announced the company would be “presenting a few interesting surprises in 2020.” One of them is expected to be a Chiron R with a fixed rear wing due at the Geneva Motor Show, but this prototype doesn’t seem to be the rumored hypercar.

Caught somewhere in South Africa waiting to make a right turn at an intersection, the interesting Chiron had cues from the aforementioned Super Sport 300+. While the vents in the front fender and on the sides do seem to be similar to those of the 304-mph machine, the prototype is missing the SS’ elongated rear end as well as the stacked exhaust tips.

The massive air vents at the front do look a lot like the ones the Super Sport 300+ has, and it appears the splitter is also somewhat similar, but we’re noticing the four-point LED headlights look sleeker. It might be because of a reshaped hood and/or bumper, unless it’s an illusion caused by the video’s mediocre quality and the poor viewing angle.

And now for the million-dollar question – What exactly are we looking at? Your guess is as good as ours, but it’s likely yet another derivative of the W16 machine with influences from the company’s latest special Chiron. Bugatti has said it is done chasing speed records, so the SS 300+ will likely remain the king of velocity.

With the Chiron Sport Edition Noire Sportive, the hypercar recently entered the second half of its life with the assembly of the 250th example out of a total of 500 cars, but fewer than 100 units are still up for grabs. 2020 should be an interesting year in terms of new reveals, but don’t hold your breath for a roadster as Bugatti isn’t making one. The closest thing to an open-top Chiron is getting the Sky View Roof option bringing dual glass panels measuring 2 feet 1.6 inches (65 centimeters) long and 1 foot 5 inches (44 centimeters) wide.