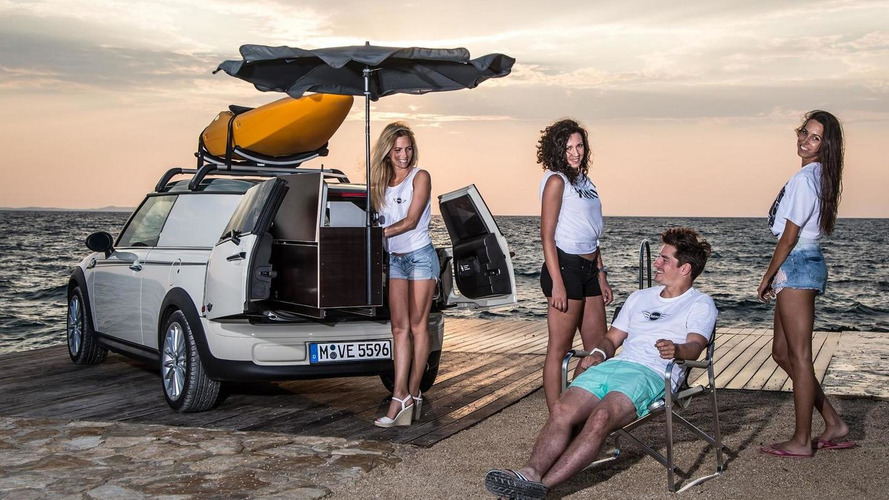 MINI has revealed a trio of summer getaway cars in the form of a Clubvan Camper, Cowley and Countryman ALL4 Camp.

MINI has revealed a trio of summer getaway cars in the form of a Clubvan Camper, Cowley and Countryman ALL4 Camp.

Clubvan Camper is being described as "world's smallest luxury camper van" offering a sleeping berth for one person along with a small, extendible kitchenette featuring a chest fridge and propane stove. Other goodies include a glass-made roof which can be opened, a satellite-navigation system and a built-in hand-held shower with a water tank installed underneath the load floor.

The MINI Cowley caravan comes with two sleeping berths, a twin-burner gas stove and a water tank with pump and sink facility. The on-board battery is charged via a solar module, while the 230-volt connection powers the TV/DVD, fridge and audio system. Its teardrop-shaped trailer has sliding windows on both doors and weighs less than 300 kg (661 lbs).

As for the MINI Countryman ALL4 Camp, this concept has a roof-mounted tent big enough for two people and can be folded out of its storage box when necessary. The vehicle wears an Absolute Black metallic paint and provides easy bicycle transportation thanks to the custom rack.