2021 Cupra Formentor Teased In Production Form Ahead Of Geneva 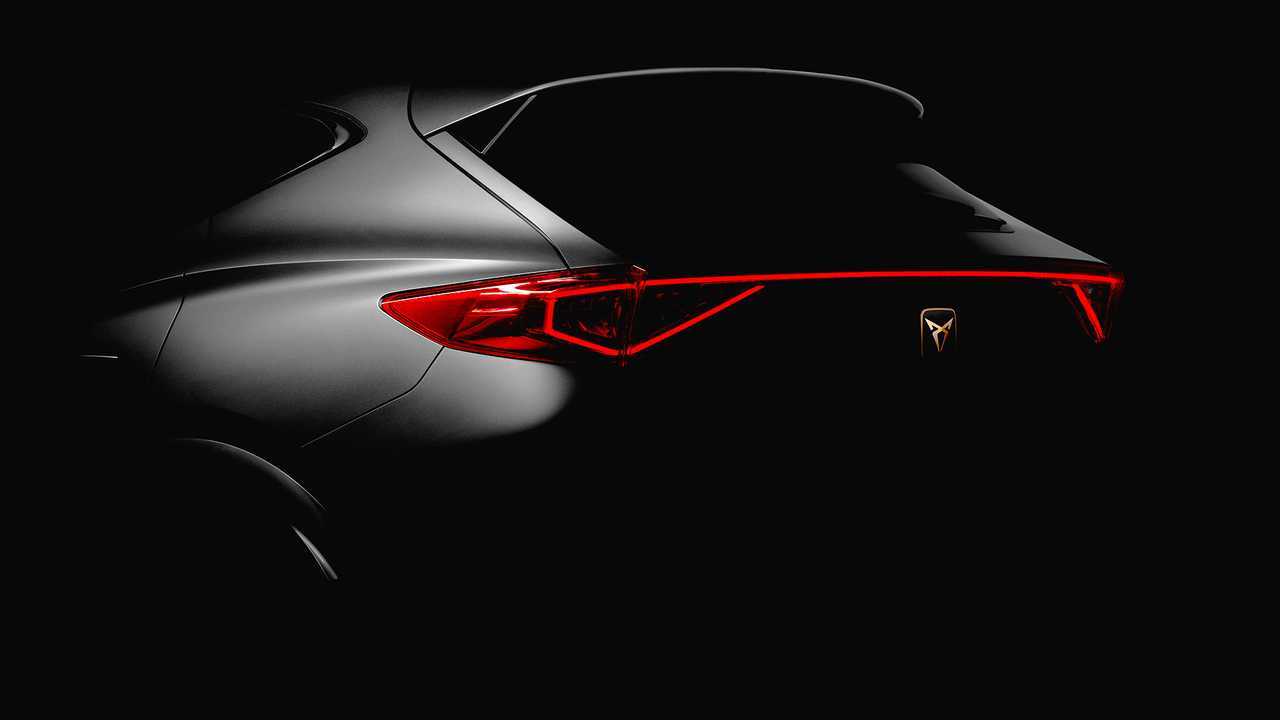 It's the first model to be exclusively developed for the Cupra brand.

The forthcoming 2020 Geneva Motor Show is going to be quite busy for SEAT’s new Cupra brand as not only will the hot Leon be there, but also the production version of the Formentor. The high-performance hatchback and wagon Leon duo together with the speedy crossover will share the spotlight with the Tarraco FR, the midsize SUV combining a more aggressive design with a plug-in hybrid powertrain.

Cupra didn’t bother to roll out an extensive teaser campaign for the Formentor because the electrified crossover was previewed last year by a namesake concept that looked just about ready to hit the assembly line. We’re expecting the final version to be nearly the same, although we’re noticing the graphics of the LED taillights are not as fancy as those of the concept before it. Nevertheless, the Formentor’s styling can be best described as a Leon crossover.

Much like the spicy Leon, the first standalone Cupra model will utilize a turbocharged 1.4-liter gasoline engine working together with an electric motor for a combined output of 242 horsepower and 400 Newton-meters (295 pound-feet) of torque. A similar – if not identical – powertrain will be available for the Skoda Octavia RS iV we spotted earlier today with virtually no camouflage, and also for the beefier Volkswagen Golf GTE. All three will come exclusively with a dual-clutch automatic transmission and will be front-wheel drive.

While the Cupra Leon will also be offered with a conventional 2.0 TSI sans an electric motor, it remains to be seen whether that will be the case for the Formentor as well. It would make sense for the Spanish brand to sell the performance crossover with a traditional powertrain as that would lower the vehicle’s price tag, thus lure in more customers.

We will know what’s what on March 3 when the Cupra Formentor will receive its world premiere in Geneva.

Milton Keynes, 26/02/2020 – SEAT and CUPRA will give debuts to three new vehicles as this year’s Geneva Motor Show: the CUPRA Formentor, the coupe crossover exclusively developed for CUPRA, as well as the SEAT Leon and CUPRA Leon.

“The Geneva Motor Show will be the first opportunity customers have to see our 2020 product offensive: SEAT Leon, CUPRA Leon and CUPRA Formentor, which will all be available in plug-in hybrid versions. These products will shift both brands to the next level”, said SEAT Executive Vice-President for Sales and Marketing and CUPRA CEO Wayne Griffiths. “We’re meeting market demands by offering a range of efficient, connected and safe vehicles that can deliver everything that our customers need, while maintaining our aims to reduce our impact on the environment.”

CUPRA Formentor
The Geneva Motor Show will be the world premiere of the CUPRA Formentor, days after the brand took the significant step of opening its own headquarters in Martorell, Barcelona. The CUPRA Formentor is the first model exclusively developed for CUPRA.

New SEAT Leon
The new SEAT Leon will make its public debut at the Show, bringing efficient and electrified engines, new standards of connectivity, and greater emphasis on design, to the segment.

The Leon has been a cornerstone of the SEAT range since 1999, accumulating more than 2.2 million sales globally (252,416 in the UK) across three generations of the model, transforming the brand into a key competitor in the UK.

The all-new SEAT Leon builds on the appeal of its predecessor but with a stronger, more purposeful character, aided by its improved aesthetic, smooth flowing surfaces and the perfect mix of curves and edges.

Both an eHybrid (Plug-in Hybrid) and eTSI (mild hybrid) will be on the stand.

The eHybrid combines a 1.4-litre TSI petrol engine electric motor, 13kWh lithium-ion battery pack and six-speed DSG transmission to produce 150kW/204PS of power. The battery – 60km (38 mile) EV range – is is recharged via a 3.6kW AC inlet and can be fully charged from 0 per cent in less than 3.5 hours.

The SEAT Leon eTSI (mild hybrid) further enhances efficiency. The technology uses a 48V starter-generator and lithium-ion battery enabling the vehicle to coast with the engine switched off, harvest energy under deceleration and provide electrical torque assistance during acceleration. The system is available with the 1.0 TSI 110PS and the 1.5 litre TSI 150PS petrol units.

The CUPRA e-Racer will also be shown to the public at Geneva. Four electric motors combine to provide 680PS of peak power and 960Nm of torque, powered by a 65kWh battery pack. From 2021, CUPRA will participate in the PURE ETCR electric touring car championship, creating a clear link between race technology and the road.

SEAT Tarraco FR
Offering enhancements to the exterior, interior and technology package, The Tarraco FR and FR Sport have been added to the large family SUV line-up.

The first Tarraco FR will be on stage in Geneva, featuring the new handwritten name plate and in a new and exclusive (to Tarraco) Merlot Red finish. Prices start from £31,945 RRP.

The company will also take the opportunity to present its latest news regarding urban mobility that were initally planned for the Mobile World Congress, including the world premiere of the eScooter.

The SEAT and CUPRA stand can be found in Hall 2, Stand 2251, with the press conference beginning at 08:30 CET on Tuesday 3rd March. A paella lunch is available 12:00-15:00 with refreshment available throughout.