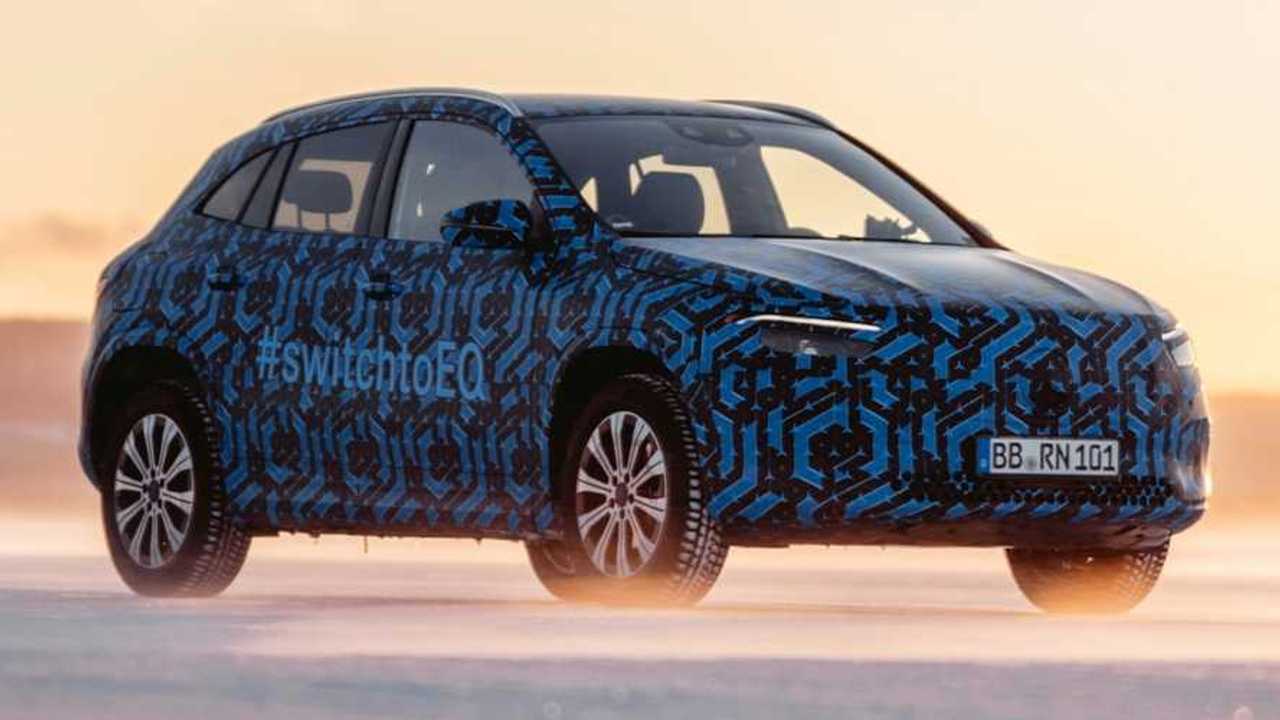 The all-electric GLA will be revealed in full before the year's end.

The original EQA concept from the 2017 Frankfurt Motor Show is now a thing of the past as the namesake production version will switch from a three-door hatchback body style to a five-door crossover. Mercedes has already confirmed the final version of its entry-level EV will be revealed sometime this year, and to ease the wait, the German luxury marque has now dropped some images taken in snowy Sweden.

A prototype carrying what seems to be the full production body has been photographed while undergoing harsh winter tests as Mercedes strives to make its electric cars work flawlessly even at temperatures well below 0 degrees Celsius. In the current tests that take place in the country that gave us SAAB, ABBA, and IKEA, the engineers are paying special attention to the battery management of the battery and the interior, while keeping a close eye on how the battery is charged in the freezing cold.

Evaluation of the EQA prototypes also involves monitoring the electric crossover’s traction control and energy recovery systems on ice and snow, along with making sure all of the onboard safety systems are working as intended.

While Mercedes still isn’t willing to talk about hot topics such as the powertrain, we’ll remind you the sleek EQA concept relied on a pair of electric motors pushing out a combined 268 horsepower and an instant torque of 368 pound-feet (499 Newton-meters). That gave the showcar a 0 to 60 mph (96 km/h) acceleration in approximately five seconds and an all-wheel-drive layout as one electric motor powered the front axle while the other sat at the rear wheels.

The EQA Is Coming:

Mercedes EQA Teased For The First Time Ahead Of 2020 Reveal

In regards to the battery, the Concept EQA as it was known by its official name, had a pack with a total capacity of more than 60 kWh. That gave it a driving range of about 249 miles (400 kilometers) as per the now obsolete NEDC, so significantly less based on WLTP and likely even less based on EPA’s testing procedures.

Production of the EQA will take place at the Smart factory in Hambach where Daimler is investing €500 million (about $542M at current exchange rates), thus making the electric GLA the first Mercedes ever to be built in France. A boxy EQB serving as the zero-emissions equivalent of the GLB is due to go on sale in 2021.

Meanwhile, Mercedes will extend its electrified offerings next week at the Geneva Motor Show with the unveiling of several plug-in hybrid derivatives of the E-Class facelift. In addition, “new models from the family of compact hybrids” are planned, so don’t be too surprised if we’ll see the PHEV versions of the GLA / GLB and / or CLA using the same powertrain as the A250e and B250e.

The compacts are turning electric: The EQA in winter testing and new plug-in hybrids at the Geneva Motor Show

Stuttgart/Geneva.  With the Concept EQA at the 2017 IAA International Motor Show in Frankfurt, Mercedes-Benz demonstrated how the EQ strategy can be transferred to the compact class. The production version of the all-electric sibling of the GLA will have its première before the end of the year. Prototypes of the EQA are currently undergoing challenging winter trials in the far north. And Mercedes-Benz will complete the EQ Power family of compacts with additional sporty models featuring the third-generation hybrid powertrain.

The new GLA rounds off the current compact car generation from Mercedes-Benz as the eighth model. An electric-model in the form of EQA will follow before the year is out. Prototypes are currently travelling the snow-covered roads of Sweden. This winter testing sees the engineers paying particular attention to the thermal management of the battery and the interior, and to charging in the cold. Further aspects are driving safety, traction and energy recovery on ice and snow.

At the same time, Mercedes-Benz Cars is expanding its line-up of plug-in hybrids under the EQ Power label and will present additional models with the third-generation hybrid powertrain at the Geneva Motor Show. For the new compact vehicles with EQ Power, (electric) driving pleasure and suitability for everyday use are to the fore.

One key aspect of the sustainable business strategy of Daimler AG is electric mobility. With its "Ambition 2039" initiative, Mercedes-Benz is working towards being able to offer a CO2-neutral new car fleet in 19 years' time. One important aspect of sustainable mobility is transparency. This is why Mercedes-Benz AG is the first premium automotive manufacturer to have had its climate protection objectives scientifically verified by the Science Based Targets Initiative (SBTI). This means that the company is in line with the requirements of the Paris World Climate Accord.

Live online: world premiere of new models from the family of compact plug-in hybrids at the 2020 Geneva Motor Show

The Mercedes-Benz press conference on the first press day, 3 March 2020, begins at 8:30 a.m. (CET) and can be experienced online from various perspectives in full length in the multi-angle live stream on Mercedes me media: https://media.mercedes-benz.com/gims2020. The complete media special for the Geneva 2020 motor show can also be found there.