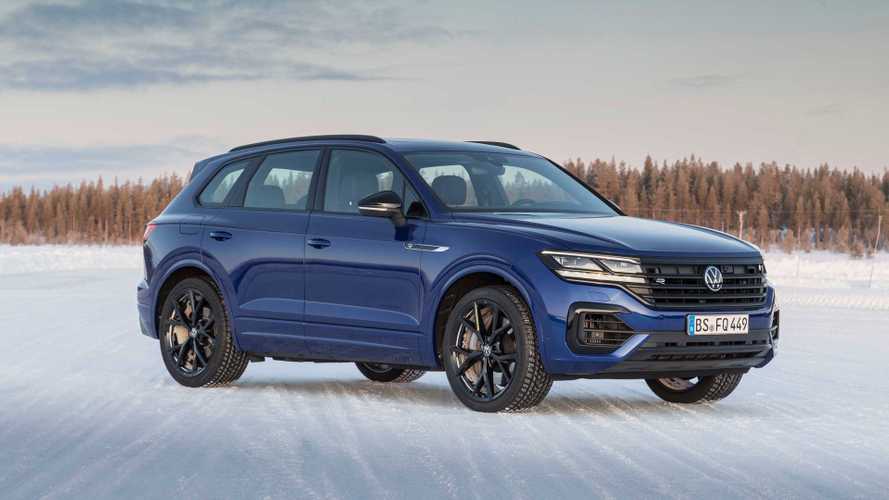 It can hit 87 mph without sipping any gasoline.

Rumors of a new high-performance Touareg carrying the “R” badge have been swirling around the Internet for years, but it wasn’t until late October 2019 when VW confirmed the return of the speedy SUV. Debuting in the metal next week at the Geneva Motor Show, the Touareg R follows the torquey Touareg R50 of the late 2000s, but instead of a large 5.0-liter V10 TDI engine, it combines a 3.0-liter V6 gasoline unit with an electric motor.

The combustion engine puts out a respectable 335 horsepower while the electric motor delivers an additional 134 hp for a combined output of 456 hp and a generous torque of 700 Newton-meters (516 pound-feet). For the sake of comparison, the other hot Touareg in the lineup, the V8 TDI model, is rated at 416 hp and 900 Nm (664 lb-ft) from its 4.0-liter turbodiesel shared with the Audi SQ7.

Getting back to the Touareg R, it’s VW’s very first R model to have a plug-in hybrid powertrain and can run solely on electric power at speeds of up to 87 mph (140 km/h) thanks to a lithium-ion battery pack mounted in the trunk area. The electrified SUV has enough juice for a zero-emissions range of up to 30 miles (48 kilometers), while the hybrid punch is estimated to enable a 0 to 62 mph (100 km/h) run in about five seconds en route to an electronically governed 155 mph (250 km/h).

The third PHEV model in VW’s European lineup after the Golf and Passat GTE models, the Touareg R also represents the company’s first all-wheel-drive plug-in hybrid model. It uses an eight-speed automatic transmission and a transfer box to send power between the front and rear axles, while a Torsen central differential lock works with the 4Motion system. Depending on the situation, up to 70 percent of the power can be sent to the front axle or as much as 80 percent to the rear wheels.

The styling changes are the ones you’d expect from an R-badged VW. Well, maybe except for the dual angular exhaust tips instead of the quad round finishers found on a Golf R. It rides as standard on 20-inch wheels, but a larger 22-inch set is optionally available for those who want to go all out. Inside, a black Puglia leather package is exclusive to the Touareg R and comes with Sepang Blue piping complemented by a thin blue decorative seam on the dashboard.

The VW Touareg R will celebrate its public debut next week at the Geneva Motor Show where it will share the spotlight with two other hot new VWs – the Golf GTI and GTD. It’s scheduled to go on sale in Europe in the second half of the year.