Who is this for?

At car shows, it's natural for people to take pictures with vehicles that they dream about owning someday. Nissan had a bizarre twist on this common concept at the Chicago Auto Show that left us very confused. The company took photos of people and then crudely photoshopped a GT-R 50th Anniversary Edtion next to them. This might have made sense if the car wasn't in Chicago, but the company had the vehicle on display. Tire Meets Road was the first to discover this weird phenomenon.

Nissan asked folks at the show if they wanted a photo with the GT-R 50th Anniversary Edition and then e-mailed them the image. "I can vouch that they [Nissan booth workers] were doing this [quick photoshop] at the Nissan booth," someone at the show told Tire Meets Road.

The image above is an example of these badly photoshopped GT-R pictures. The car appears to be in a much lower resolution than the rest of the photo. Also, the lighting doesn't match, and the greenhouse is opaque, so there's no way to see the interior. The angle of the vehicle largely hides the white stripe over the body, which is one of the major aesthetic additions to the 50th Anniversary Edition.

Motor1.com reached out to Nissan for an explanation of why it did things this way. Our theory is that these photos are a promotional campaign that the company can offer at a variety of events, and the real car wouldn't usually be there. 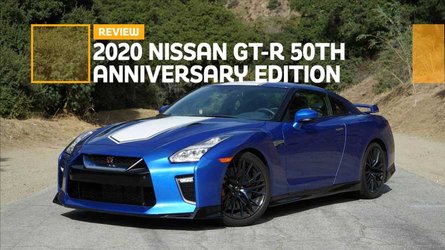 Still, this doesn't explain why anyone would want a photo standing next to a low-res, badly photoshopped car. Even if it's free, the picture seems pointless.

As a refresher, the GT-R 50th Anniversary Edition gets a body in a shade of blue that comes from the R34 Skyline GT-R, and there's a white stripe running from the tip of the hood to the rear deck. Inside, there's a gray cabin with Alcantara covering the headliner and sun visors. It's available on the Premium, Track, and Nismo grades.