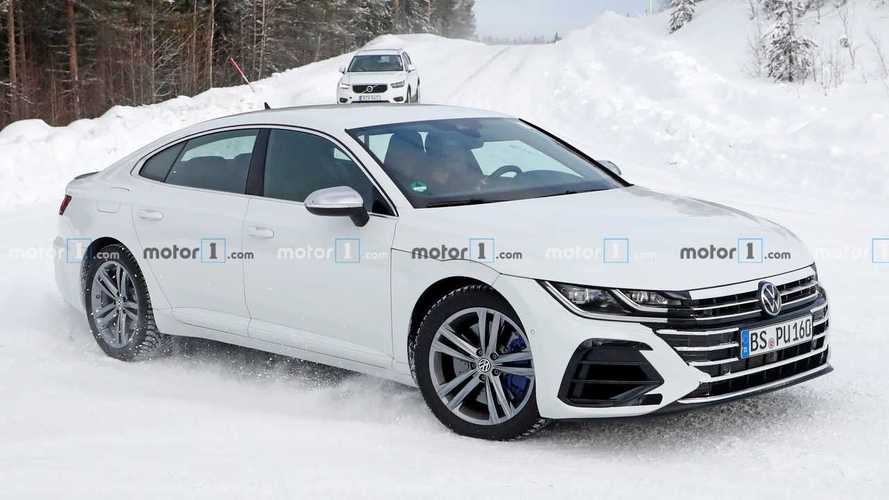 It reportedly packs a new 3.0-liter turbocharged VR6 with over 400 horsepower.

The Volkswagen Arteon R will give the sedan an extra boost of performance, and these new spy shots indicate that the model wraps the additional power in an understated body. Look for this meaner four-door to arrive later this year and be on sale for the 2021 model year.

In comparison to the regular Arteon, VW fits this one with additional slats in the grille. There are also bigger inlets in the corners of the fascia. In profile, there are no discernible changes. The company adds a tiny, black spoiler to the rear deck, and there's a revised lower fascia with four rectangular exhaust outlets. The model also wears cross-drilled brakes in front and has blue calipers. There are no photos of the interior, but we would expect tweaks like seats with larger bolsters and possibly some carbon fiber touches.

The Arteon R would allegedly use a new 3.0-liter turbocharged version of Volkswagen's VR6 engine that would make 404 horsepower (301 kilowatts). The power would run through a 4Motion all-wheel-drive system. The vehicle's transmission is still a mystery at this point.

Save Thousands On A New Volkswagen 8469

VW is currently preparing a minor refresh for the Arteon that would give the model revised lighting, new wheel designs, and an updated interior. The revised car arrives before the end of the year. Spy shots also tell us that a wagon version is coming, but it's not clear whether this long-roof variant would be available in the United States. The company is evaluating the market before making a decision.