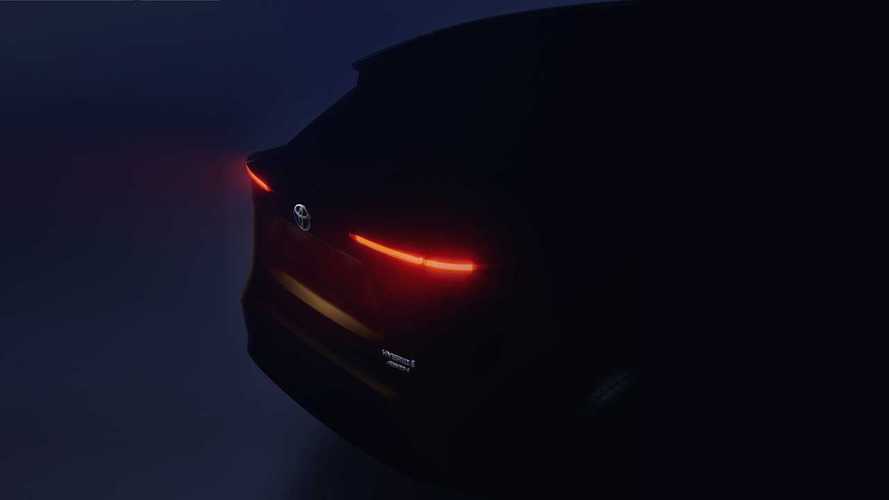 Europe’s subcompact crossover segment may be getting crowded, but Toyota is confident there’s still room for one more. Known for the time being simply as the “B-SUV,” the new arrival “blends extensive small car experience with enviable SUV heritage,” which is the company’s way of saying the latest Yaris supermini is getting the crossover treatment. A new shadowy teaser image has been released to show a little bit of the vehicle’s rear end, along with a mustard yellow color.

More important are the two badges on the bottom-right corner of the tailgate, revealing the small crossover will be available with all-wheel drive and a hybrid powertrain. The blue Toyota badge further denotes the vehicle has an electrified setup, and it’s flanked by what seem to be slim LED taillights extending onto the tailgate.

A previous teaser image depicted a sketch of the B-SUV’s side profile, hinting at a nearly flat roofline. This leads us to believe the new model will be more practical than the funky C-HR by offering superior room for passengers and their luggage than its cooler cousin. The Nissan Juke competitor will be positioned below the C-HR in Toyota’s lineup and will be longer, taller, and wider than the Yaris. At the same time, it’ll have a longer wheelbase and an off-road-ready suspension arrangement.

Don’t go into thinking the B-SUV will simply represent a Yaris crossover as Toyota has promised it’s going to be “an entirely new and distinctive B-SUV model” featuring a “compact, dynamic design and a personality of its own.” The two will share the TNGA-B platform and the 1.5-liter gasoline-electric hybrid powertrain, but look for the high-riding model to have a distinct identity.

The B-SUV will premiere on March 3 at the 2020 Geneva Motor Show where Toyota is also bringing the second-generation Mirai, RAV4 Plug-in Hybrid, and the GR Yaris – all Euro debuts. In addition, the recently revealed four-cylinder Supra 2.0 is also heading to Switzerland.

The new model has a raised ground clearance and an intelligent all-wheel drive system, and benefits from Toyota’s latest hybrid powertrain technology.

It will be revealed during Toyota’s press conference, taking place on the Toyota stand in Hall 4 of Geneva’s Palexpo exhibition centre at 11.15am on 3 March.

There will also be European motor show debuts for the all-new Yaris and the new RAV4 Plug-in Hybrid SUV. The all-new Mirai will also appear in public in Europe for the first time, presented in a dedicated area highlighting Toyota’s commitment to helping build a future hydrogen society.

The Gazoo Racing area of the Toyota stand will feature the new GR Yaris alongside the 2020 WRC Yaris rally car and Fernando Alonso’s 2020 Dakar Hilux.

The Toyota press conference will be broadcast live via the following link: https://www.youtube.com/watch?v=wki5wGdIzhM