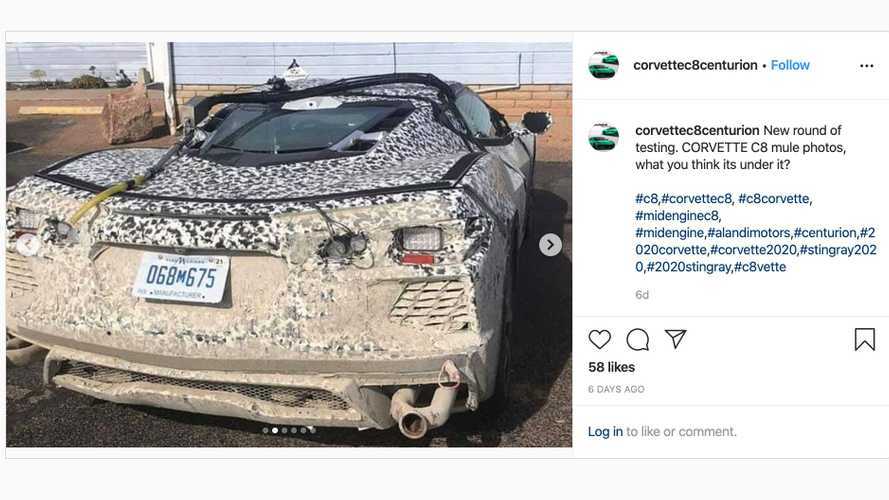 Could this be a Z06 test mule, and the equipment is evaluating the powertrain?

The shots catch three Corvette prototypes together. Let's start with the more interesting one that has all of the weird testing equipment. A bundle of thick cables runs out of the passenger side window and goes to a metal box that's on the side of the rear glass. A hose attaches to the box, and it hangs off the rear of the vehicle. Also of note, the exhaust has a weird layout that joins two pipes together into a single outlet on each side. The location of the equipment suggests Chevy's engineers are evaluating the powertrain.

The front end of this car has a different front fascia than the standard Corvette. The center section is closed, and there are a total of four inlets in the design. The splitter looks larger, too.

The other cars don't have the same equipment on them. However, one of them has an antenna emerging from the passenger side of the roof. The photos don't provide a great angle, but the third 'Vette doesn't have any obvious testing equipment on it but still wears a camouflage wrap over the entire body.

Other recent spy shots show Chevy developing what we believe is the new Corvette Z06. It's possible that this equipment and the different front fascia could be a look at the brand's engineers developing the more potent model. A video of the model indicates that the vehicle packs a naturally aspirated V8 with a flat-plane crankshaft. There would also be a significantly more aggressive body, including a big rear wing.