It should debut sometime this year.

It was last July when Ford unveiled the Puma, a revived nameplate that once adorned a three-door hatchback. The Puma is back, but it’s wearing a new, high-riding suit, returning as another crossover in Ford’s already packed stable. With the new crossover comes a performance version — the Puma ST. Spy photos of the camouflaged performance crossover appeared before the regular Puma even arrived. Today, we have spy photos of the Puma ST without any camouflage, giving us our first look at the sheet metal underneath.

The lack of camo reveals much of what we expected to find. We can see the black spoiler lip and can spot a large intercooler hiding behind the front bumper. At the back, there are dual tailpipes and a larger roof spoiler. Inside, the Puma ST looks much like the regular Puma with the infotainment screen stuck on the dashboard, and the HVAC controls pushed low on the instrument panel. The Puma ST also appears to have Recaro seats and larger brakes.

The Puma ST With And Without Camouflage: 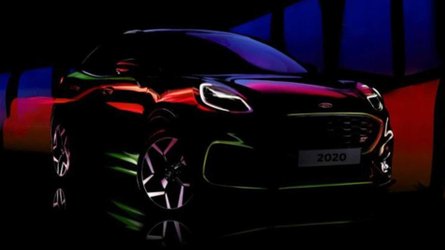 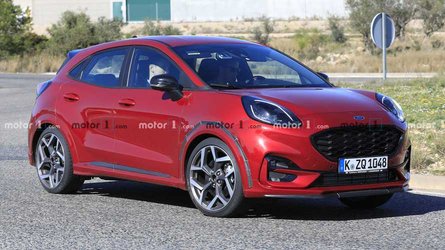 The Puma ST should share its powertrain with the Ford Fiesta ST. That means the performance Puma will use the same turbocharged 1.5-liter three-cylinder engine. In the Fiesta ST, the mill makes 198 horsepower (148 kilowatts) and 214 pound-feet (290 Newton-meters) of torque. Power should route to the front tires through a six-speed manual gearbox, just like the Fiesta ST. While the Fiesta ST can rocket to 62 miles per hour (100 kilometers per hour) in 6.5 seconds, the larger and heavier Puma ST should be a tad slower but should still be able to do it in under 7 seconds.

The Ford Puma isn’t a crossover you should expect to see in the U.S. It’s strictly for the European market. That means the sportier Puma ST is another piece of forbidden fruit from the tree of Ford. We won’t get to enjoy it stateside when it arrives later this year. Ford should debut the model sometime this summer, possibly for the 2021 model year.