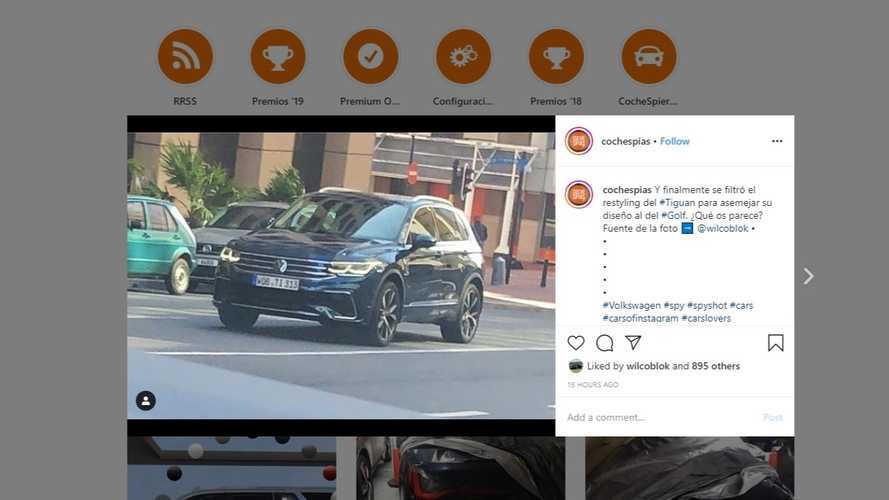 An official debut is likely imminent.

It was only yesterday when our own spies caught the VW Tiguan testing its facelift somewhere in chilly northern Europe and now another example of the popular compact crossover has been spotted via cochespias on Instagram. The big difference between the two is the vehicle depicted here wasn’t carrying any sort of camouflage on its body, thus revealing what has changed. With no camo and a couple of other VWs in the background, we’re tempted to believe the 2021 Tiguan was participating in a photo shoot ahead of its official release.

Carrying Wolfsburg plates, the vehicle was allegedly caught in Cape Town, South Africa and was obviously a high-specification model as these are the ones automakers use when they take pictures and videos of future products. The generous air intakes, chrome accents, and the big two-tone alloys suggest it’s an R-Line model, although we’re not seeing VW’s updated “R-Line” badge that debuted with the Atlas Cross Sport.

Interestingly, a 2021 Tiguan featuring the exact same paint was photographed camo-free nearly a month ago when it too was participating in a promo session. The new shot is from a better angle and allows us to see the Golf-like full-LED headlights and a revised grille carrying the company’s new logo. The fog lights are no longer positioned at the corners of the bumper as they’ve been integrated into the main headlights, thus lending the front fascia a cleaner appearance.

Although we can’t see the rear of the crossover, yesterday’s spy shots revealed VW is going to tweak the taillights and bumper for the Tiguan’s mid-cycle refresh. Some changes inside the cabin are expected, but chances are these will be rather subtle.

With VW preparing marketing materials for the 2021 Tiguan, a reveal can’t be too far behind. We might get to see it as early as next month in Geneva. If that’s going to be the case, teasers could be released in the following days.

Have You Seen These Spy Photos?