Here's a neat surprise for your Friday. We've seen quite a few spy shots of the forthcoming Ford Bronco, but this is the first time we've seen a two-door model in production guise. If there were any doubts about this new Ford being aimed squarely at the Jeep Wrangler, these photos should put all that to rest.

The new batch of photos are crystal clear, and there's no denying the Bronco looks right at home in an off-road environment. The wheelbase for the two-door is certainly shorter, and this prototype wears some rather hefty all-terrain tires to boot. As with previous sightings, the camouflage on the roof might exaggerate just how tall the Bronco will be. Heavy coverings upfront still hide the grille, but we know it will resemble the design Ford already previewed with its Bronco R Baja racer.

Aside from that, the roof camouflage likely covers a removable top just like you'll find on the Jeep Wrangler. For that matter, the reborn off-roader is expected to have removable doors as well. Several patents – including one discovered quite recently – suggests the option is all but guaranteed for the production SUV. An externally-mounted spare and gobs of ground clearance are also very Wrangler-esque so yeah, Ford is definitely aiming to steal sales from Jeep with this long-awaited offering. 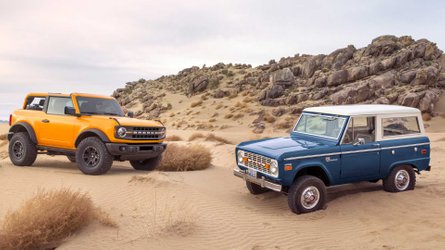 And we don't have much longer to wait. Aside from finally seeing production-based prototypes instead of strange test mules, Ford confirmed the covers would be lifted this spring. That could be as early as March or as late as June, though we're hearing rumors that an event might be planned for April, perhaps tied to the New York Auto Show. Another possibility is the North American International Auto Show in Detroit, which will kick off its new timeslot just before the start of summer in early June.