The Equinox RS has dark accents and a quad exhaust system.

By: Adrian Padeanu
Listen to this article

We first caught a glimpse of the revised Equinox at the beginning of the year when images of Chevy’s compact crossover emerged onto the web courtesy of Chinese media. Those photos were showing the CN-spec model, but it comes as no surprise the North American model looks virtually the same in the photos released today by the company with the 2021MY.

Generally speaking, the styling tweaks are pretty subtle, but the headlights have been subjected to a more significant update and are now split into two. The reshaped grille now extends onto the sides of the front fascia and bisects the headlights to give the Equinox a rather interesting look. At the back, Chevy has revised the taillight graphics, but that’s pretty much it.

The biggest news regarding the 2021 Equinox is the launch of a new RS trim bringing a glossy black front grille complemented by other dark accents. The bowties, badges, and roof rails all come in black, as do those 19-inch alloy wheels and quad exhaust tips. Inside, the new member of the family has a predominately black cabin with contrasting red stitching and a model-specific gear shifter.

Go for the flagship Premier trim and you also get a glossy black grille, but on this version, it’s combined with chrome inserts. There are new 19-inch alloy wheels, along with different stitching on the inside where the center console has a glossy black finish. Interestingly, Chevy says the 2021 Equinox comes with a logo projection liftgate, although that’s unlikely to make people rush into dealerships. 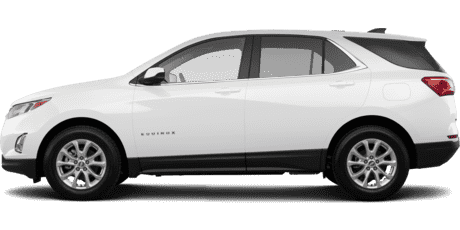 Chevy’s best-selling SUV and at the same time GM’s second best-selling SUV will go on sale this fall with greater availability of safety systems across the trim levels. It will soldier on with the 1.5- and 2.0-liter turbocharged engines, with a six-speed automatic transmission for the former and a nine-speed for the latter. As before, customers will get to pick from front- or all-wheel drive.

Here's What We Had To Say About The Outgoing Equinox: