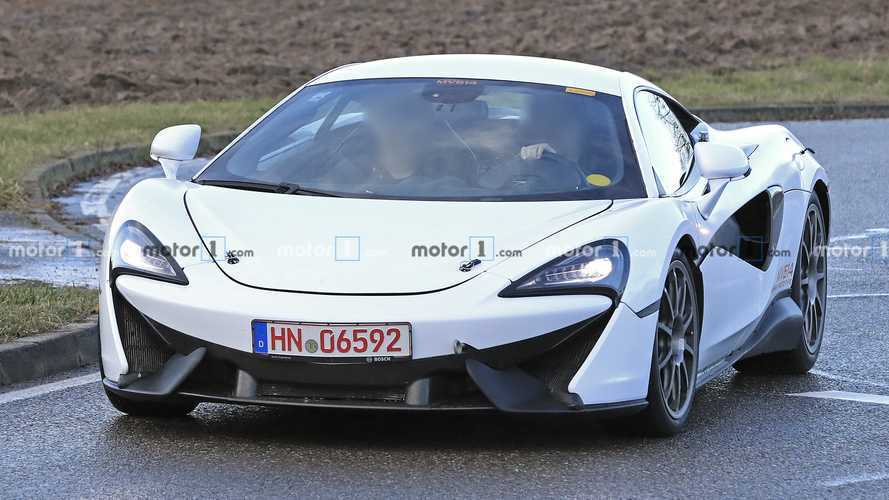 The car's development is still far from complete.

McLaren has a test mule on the road that could be our first glimpse of the replacement for the company' Sports Series lineup, which currently includes the 600LT, 570S family of models, and 540C. The shots even provide a look inside.

In front, there's not much to see on this test mule because it looks just like the other Sports Series models. The aggressive front fascia is similar to the piece on the new 620R. The poor fit for the hood and the pins fastening it indicate this is just a placeholder panel.

The bigger news is at the back. McLaren doesn't even try to hide that there's a hybrid powertrain by putting a big decal proclaiming it on the rear fender. At the rear, the company cuts a hole between the taillights and routes the exhaust out of there. The engineers put insulation under the pipes to keep their heat from harming the bodywork.

McLaren is no stranger is hybrid performance, but it hasn't yet offered the electrified boost on one of its Sports Series vehicles. Presumably, the system would connect to the brand's familiar twin-turbo V8 engine.

See What The Latest McLaren Can Do:

The glimpse inside the cabin offers more evidence that this vehicle is far from being a production-ready machine. There is a rectangular screen for the digital instrument cluster, and there isn't any trim around it. Empty panels around the cabin are more proof that McLaren has a lot of work still to do.

A debut date for the next-gen Sports Series model is a mystery. Our spy photographer believes it could happen in 2021, which seems like a feasible timeframe for the debut.