2021 Hyundai Elantra Spied Standing Out In A Snowy Field 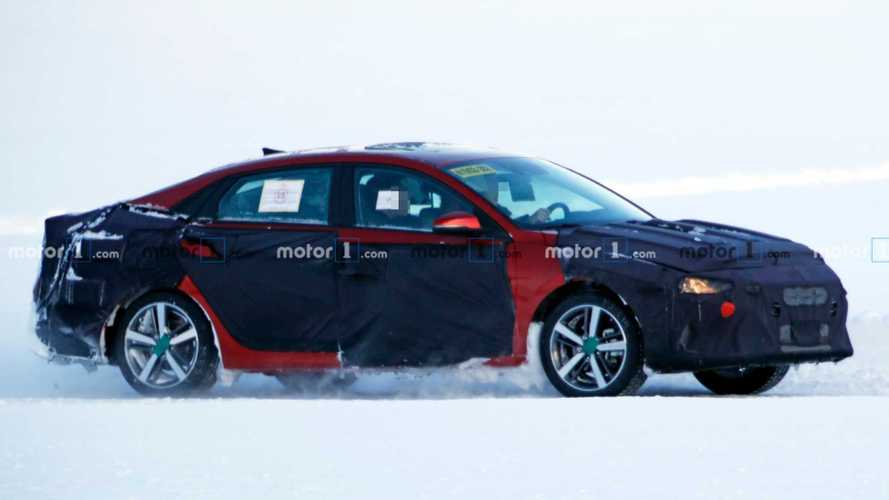 It's cold in Sweden, but this prototype's red finish looks hot.

Amid the impending debuts of machines like the Ford Bronco and Porsche 911 Turbo, one might overlook the redesigned Hyundai Elantra that’s currently in development. This is only the second time we’ve caught a prototype out and about, and it looks decidedly cold in the wintertime grip of Sweden – the same place where we recently caught the company’s new Santa Cruz pickup testing in the snow.

A New Elantra Is On The Way:

There’s still heavy black camouflage on the outside, but this time around there’s no swirl camo wrap underneath. Indeed, the bright red exterior provides an interesting contract for us to suss out details of the redesigned sedan, which actually just had a minor facelift for the 2019 model year. Our initial sighting suggested the Elantra would draw on design inspiration from the larger Sonata – inside sources tell us that’s the case and we can certainly see Sonata influence with this prototype.

The C-pillar looks very Sonata-like, and though the front fascia is concealed by covers, we can see more Sonata influence in the grille. Look closely and you’ll see the grille’s edges arcing upward from the lower lip to the headlights in a telltale Sonata fashion. Word is the small sedan will grow as well, but by exactly how much is unknown. It certainly looks bigger in these photos, which suggests the changes won't be minuscule.

We’ve heard nothing thus far regarding interior design or new technology, but there are some new rumors regarding power. The latest gossip says a pair of new turbocharged gasoline engines will be offered, one displacing 1.2 liters and the other 1.6. It’s possible a high-performance N edition could eventually arrive, and since there’s no stopping the advent of electric power, a hybrid version might debut later, too.

Speaking of the debut, current intel says the covers will be lifted sometime in the first half of this year, going on sale as a 2021 model.