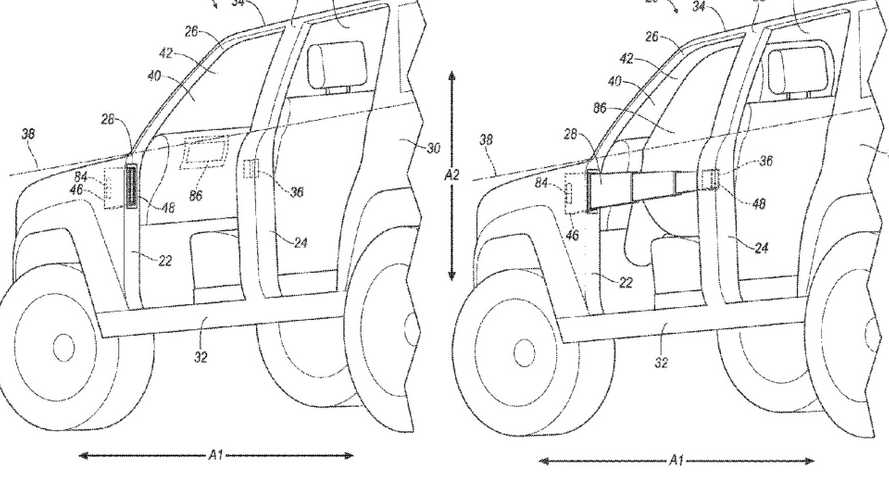 This tech would make the Bronco safer when driving with the doors off.

A newly published patent application from Ford could hint at a novel feature that the company might use on the new Bronco. If the doors are off and a crash occurs, a telescoping section would extend from the base of the A-pillar that would protect the occupant. The idea is very similar to an earlier Ford patent application that might have ties to the Bronco.

According to Ford's patent application, the telescoping sections would be in a retracted position during normal driving, and sensors would detect whether the doors are in place. If there is a crash, then an inflator would activate, causing the telescoping piece to deploy. The company says this extending section could be "plastic, metal, or any suitable material, including a combination thereof." The result would be a way to restrain occupants from falling out of the vehicle, and the airbags would deploy at the same time.

The automaker's patent describes that there could be multiple telescoping pieces along the door panel, rather than just one. This would potentially provide more protection at the expense of requiring more material.

Oddly, the filing doesn't describe a second, rather obvious application of this idea. Instead of deploying the barrier only during an accident, a natural alternative would be making them extendable whenever the doors are off. The result would be similar to the tubular doors available for vehicles like the Jeep Wrangler (see example below), but the telescoping sections would always be available whenever the owner removes the doors.

Ford filed for the patent on February 16, 2018, but the United States Patent and Trademark Office didn't publish it until February 4, 2020. As with any patent, there's no guarantee that the automaker intends to implement this technology on production vehicles.