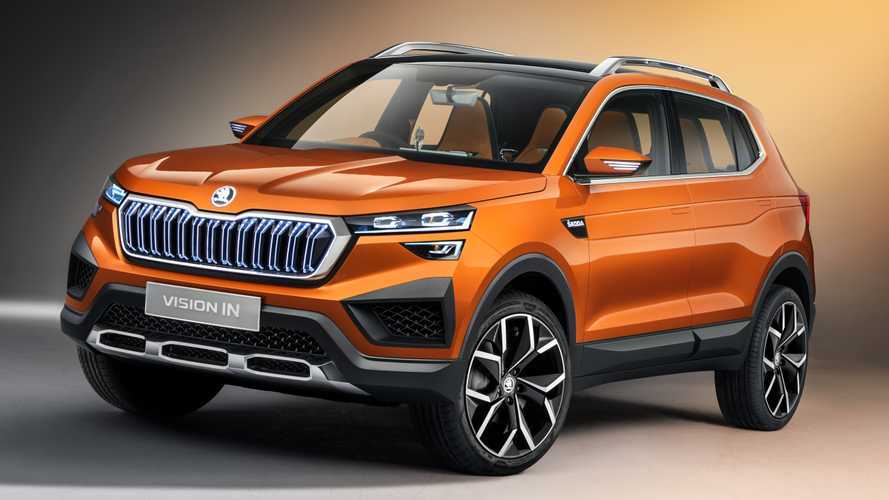 Don't expect the production version to be this glitzy.

Debuting at Auto Expo alongside the mechanically related Taigun, the Skoda Vision IN takes the shape of a somewhat boldly designed small crossover. It shares the MQB A0 underpinnings with the Volkswagen, with both riding on an Indian version of the VW Group’s smallest version of its modular platform. Although it’s technically a concept car, we’re not expecting the production version due in 2021 to go through major changes.

That said, it’s highly unlikely the illuminated grille will be available on the road-going model, so if you really want LEDs in your SUV’s grille, you’ll have to step up to a BMW X6. We also believe those pop-out door handles won’t be implemented on the production model, and Skoda probably won’t sell the vehicle with the concept’s 19-inch wheels.

Other than that, the exterior looks pretty much ready for a production model. Unsurprisingly, it blends styling cues from existing models as it sort of looks like a mélange between the Karoq and Scala. Those front and rear underguards along with the roof rails will probably be toned down for the production model, and the relatively large air intakes will shrink a bit.

More changes will occur inside the cabin where the Vision IN in production form won’t look as nice as this minimalist interior. The tablet-styled infotainment system measuring 12.3 inches and the digital instrument cluster are expected on the production model, but the climate control settings will likely have a traditional layout.

At 4256 millimeters (167.6 inches) long, the Vision IN concept is a little bit longer than the Euro-spec Kamiq and has a slightly more generous wheelbase. It’s powered by a four-cylinder 1.5-liter turbocharged gasoline engine with 150 hp and 250 Nm (184 lb-ft) sent to the road through a seven-speed dual-clutch automatic transmission. It helps the crossover sprint to 62 mph (100 km/h) in 8.7 seconds and max out at 121 mph (195 km/h). Much like the aforementioned Taigun, its Skoda cousin is strictly front-wheel drive.

As a final note, it’s worth mentioning the concept has something Skoda refers to as a “crystalline assistant” placed on the dashboard serving “as a bridge to the digital world.” Obviously, you won’t see it in the production model.

What Else Is New From Skoda?