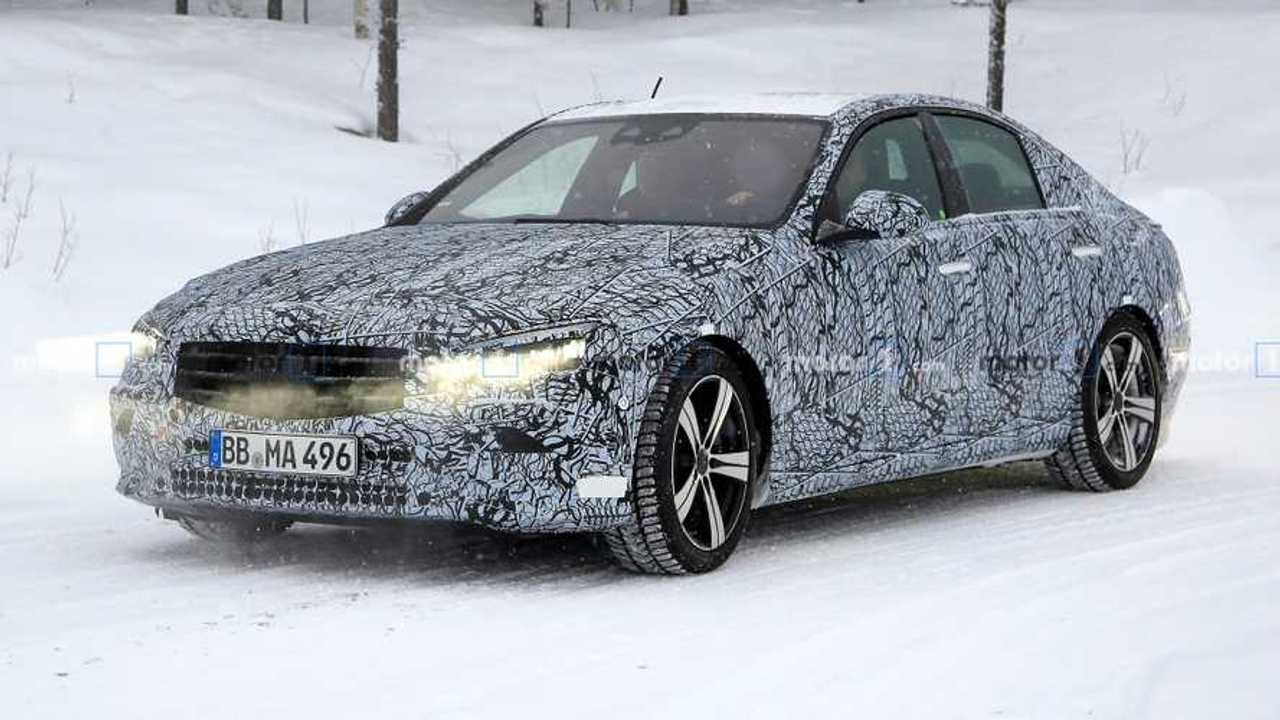 Despite the camo, it's obvious the new C-Class will be going through quite a few styling changes.

The C-Class is without a shadow of a doubt one of the most successful cars Daimler has ever offered taking into consideration it has racked up more than 10 million sales since 1982 when the Mercedes-Benz 190 (W201) was launched. It received the C-Class moniker with the W202 launched in 1993 and is still going strong to this day. The current W205 generated 392,900 sales in sedan and wagon flavors last year, with demand for China’s long-wheelbase sedan growing by nine percent to record levels.

As spy shots have revealed, work is well underway for the W206 expected to go on sale in the United States probably as a 2022MY. A fresh batch of photos taken in snowy Sweden reveals Mercedes is hard at work preparing its next BMW 3 Series competitor while working on some other models in the process. Speaking of which, the E-Class is about to get a facelift later this year when we’ll also get to see the next-gen S-Class.

The prototypes are still fully covered up, but the disguise does seem to be a little bit thinner than before. We’re able to see a good chunk of the headlight design featuring an angular look in line with other Mercedes sedans. At the back, there are horizontally arranged taillights to replace the vertical setup of today’s C-Class. Although not visible, there is a chance the taillights extend on the trunk lid seeing as how this layout has been applied to the A-Class Sedan, CLA, CLS, and will be implemented in the aforementioned E-Class facelift and new S-Class.

The New C-Class Is Coming:

While the shape and size will remain similar compared to the existing model, the W206 will sit on a revised MRA platform that will unlock a variety of plug-in hybrid powertrains and mild-hybrid tech. Expect a double-wishbone front suspension combined with a multi-link rear setup, with adaptive dampers on the more expensive versions of the range.

There are no images of the interior just yet, but from some angles, we can see there’s no tablet-like infotainment system sticking out from the dashboard. It means the touchscreen belonging to the COMAND-replacing MBUX will be integrated into the center console. Revised packaging enabled by the MRA platform – corroborated with a possible minor bump in size – could translate into more room for passengers and their luggage, but we’ll just have to wait and see about that.

Aside from the usual body styles we’re all familiar with, there might be a C-Class All-Terrain as an alternative to the GLC to go after the Audi A4 Allroad and the Volvo V60 Cross Country. The jacked-up rugged wagon with standard 4Matic has been long-rumored, and it looks like it’ll finally make it to the assembly line with the next C.

Have You Seen The Previous Spy Shots And Rendering?

The rumor mill also suggests there will be a shocking change to the C63, which we’re honestly finding hard to believe at this point. Apparently, the twin-turbo 4.0-liter V8 will be dropped in favor of a plug-in hybrid four-cylinder based on the M139 engine used in the new A45 where it pumps out 416 horsepower and 369 pound-feet (500 Newton-meters). The electrified variant will push those already impressive output numbers even higher, but we’re sure many will have a problem getting used to the idea of a four-cylinder C63. Time will tell.

There’s still a lot we don’t know about the W206, but that’s part of the fun since it makes the waiting process more exciting as the pieces of the puzzle begin to add up. It is believed we'll have to wait until early October for the Paris Motor Show to see the new C-Class. A purely electric derivative is expected to follow further down the line.